As I already mentioned in the entry on the Request in the Spanish crown, serious concerns had arisen about the ill-treatment of some encomenderos against the Indians. These facts would delegitimize the conquest and colonization of the new lands, since this legitimation was based on the papal bulls of Alexander VI and in them the Christianization of those regions was essential and, evidently, mistreating was not Christianized. This was understood by King Fernando who wanted to endow all his political actions with reason and justice, and in December 1512 he gathered the most important Spanish jurists and theologians of the time in Burgos to debate this matter. This fact has absolutely unparalleled in the history of humanity, that a conquering power self-criticized and reviewed its own actions without previous denunciation or foreign pressure. 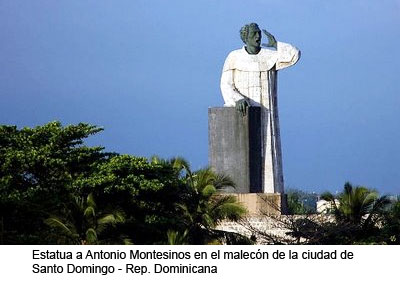 The spark that exploded the barrel was the famous Advent sermon of the Dominican friar Fray Antón de Montesinos in Santo Domingo, where he accused the Spanish settlers of mistreating the natives who worked for them and denied them confession, events that reached Castile and provoked the condemnation of the superior of the Dominicans, Fray Alonso de Loaysa, his own companions and King Ferdinand which ordered the friar to be taken to Spain to be punished for questioning the royal orders executed in the New World. . The Encomienda was one of them.

The immediate consequence was the summoning of the Junta de Burgos, which resulted in the Laws of 1512. More than twenty sessions were held in the Chapter Hall of the late Dominican Convent of San Pablo under the presidency of Bishop Juan Rodríguez de Fonseca.

These laws constituted two very important facts in themselves:

1st – It was the first general normative text on the treatment of Indians in the America newly discovered.

2nd – It was the embryo of a new philosophical, theological, legal and social theory that determined the birth of the International Law and the recognition of the Human Rights.

The original name of these laws was “Royal ordinances for the good regiment and treatment of the Indians”. It consisted of 35 laws or articles regulating the regime of the Indians, their personal living and working conditions, their rights, the lawfulness of their use as labour, etc., and more importantly, for the first time their status as free man and owner of basic human rights, like that of freedom and property, was recognized.

The Board reached the following conclusions:

1. Indians are free and should be treated as such, as ordered by the Kings.

2. Indians have to be instructed in the faith, as the papal bulls command.

3. Indians have an obligation to work, without hindering their education in the faith, and so that it is of benefit to them and to the republic.

4. The work that the Indians must do must be in conformity with their constitution, so that they can bear it, and must be accompanied by their hours of distraction and rest.

5. The Indians must have their own houses and estates, and they must have time to dedicate to their cultivation and maintenance.

7. Indians must be paid a fair wage for their work.

These conclusions meant the permanence and validity of the Encomienda but regulating and fixing the treatment that the Indians were to receive.

The Dominicans were not happy and continued to protest the approval of new improvements in the Valladolid Laws of the following year, 1513, especially concerning Indian women and children.

Its application was rather limited, the power of the encomenderos and the remoteness of the central power did not help its effective functioning, but they were real and remained the crown’s effort to improve the quality of life of the main victims of the conquest.