After the investigation in which the bad habits of the admiral Christopher Columbus and his brothers in government were made very clear, Bobadilla set about his task without further delay. He tried to normalize relations between the Spaniards and the Spanish government by granting everything in his power so that the island would begin to be a peaceful, productive and as developed as possible.

It boosted agriculture to improve the supply of Hispaniola agriculture by selling and handing over land for cultivation, continued to expand the new city of Santo Domingo by tracing new streets and dividing up plots for the construction of new houses, paid all wages owed by the admiral and encouraged the extraction of gold in Haina and Cibao by liberalizing the amounts to be extracted and applying generous tax exemptions. All these measures were aimed at developing the local economy to the detriment of the immediate benefits that could be obtained for the crown. Although, obviously, the greater the economic independence of the island, the less it would cost the royal coffers.

Little more can be said about the period of almost two years in which Calatrava’s commander Don Francisco de Bobadilla ruled Spain and not because he did nothing but because much of the documentation about his activities went with him to the bottom of the sea in the shipwreck of his boat back to Spain.

Problems with the Spanish settlers were suffocated but with the Indians continued to produce sporadic rebellions and uprisings because they did not finish accepting the taxes imposed on them and the hard tasks they had to carry out on the land and in the mines, a place where for the first time the Indian labour was introduced. The cruel indians distributions created by Columbus continued to take place and the drastic change in lifestyle began to have harmful effects on the indigenous population, who began to flee to the mountains trying to escape from this new lifestyle to the European. 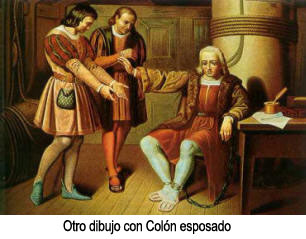 Meanwhile Christopher Columbus and his brothers arrived in Castile in December 1500. The kings, knowing that they had arrived in handcuffs, immediately released them and excused themselves by manifesting to him that they had never wished for such humiliating treatment. However, it is known that the captain of the caravel carried by Don Alonso de Vallejo offered to remove the chains for a more comfortable trip, but they refused because they knew the impact that would have on Castile coming from this way.

The kings had lost all confidence in Columbus but still valued him as the great navigator he was, so they chose to continue to use him as a great navigator in a skillful maneuver, allowing him to make a new expedition in search of that strait that led to Asia and its riches. But politically, he was not given back his privileges or his positions as Viceroy and Governor, even though the admiral requested them.