After the great reception dispensed by the Reyes Católicos to Christopher Columbus en Barcelona, they ordered him to begin immediately begin the preparation of a second expedition to the Indias. The news of the Discovery had even reached the Portuguese king John II even before them, due to the arrival of Columbus at Lisbon, and they feared that it would be possible to advance and send fleets westwards, even though they did not have the maps and routes followed by the castilian ships. The Catholic Kings were also very concerned about the expeditionaries who left in the Hispaniola island in Fuerte Navidad, so they tried to return as soon as possible to help them. 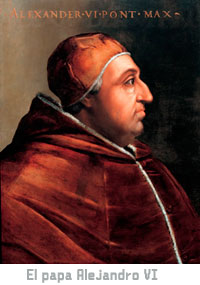 This papal bull obviously would not like anything at all to Portugal so the Pope issued a new bull the following day according to which, and to separate the zones of influence of the two maritime powers, a line was created to imagine that connected both poles and passed to 100 sea leagues to the west of Azores islands.

The admiral was confirmed in all the positions he was awarded in the Santa Fe capitulations, and he was nominated as Captain General of the squadron that it was being prepared, on which he would have full and absolute power.

They were in charge of organizing it, along with Columbus, the archdeacon of Sevilla don Juan Rodríguez de Fonseca, who inaugurated an office in the capital of Seville, together with Francisco Pinelo as treasurer and Juan de Soria as an accountant, began to control the entire market and business with the Indias.

This would be the germ of the future Court of the Indies. At the same time, the kings commissioned Columbus to create an institution in La Isla Española similar to that created in Seville and to keep similar records of the charges, crew and ammunition of each ship. The state wanted to control everything that went in and out of its ports in the direction of the Indies and everything that came from them. 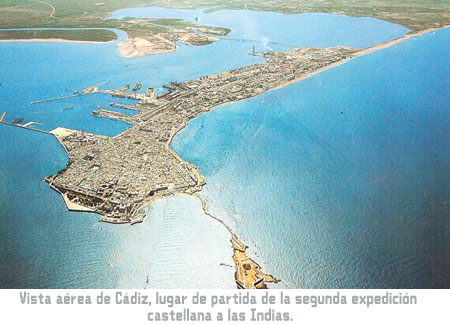 In just four months everything was ready. This was a real fleet of colonization. Along with the number of ships, 17 in total (3 ratchets, 2 naos and 12 caravels), some 1500 people were going to embark on adventures and full of hope to improve their lives in the, as they had been told, earthly parade where nature provided everything you needed and gold flowed in the rivers.

In the crew you could find all kinds of trades: sailors, soldiers, laborers, blacksmiths, masons, carpenters, braceros, etc., all of them with their tools and construction materials. They also carried cows, horses, mares, sheep, pigs and all kinds of plants. Likewise, and for the first time, women and religious were embarked, among them were Fray Juan Pérez, first protector of Columbus in La Rábida, and the Aragonese Benedictine Fray Bernardo Boyl, appointed by Pope Alexander VI, Apostolic Vicar of the West Indies, in charge of the evangelical task in the new territories.

On September 25th, 1493, it departed from the Andalusian city of Cádiz this large fleet in the direction of the West Indies.