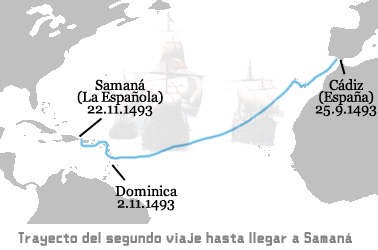 The fleet of seventeen ships departed from the bay of Cádiz at dawn of September 25th,1493, heading for the Canary Islands where they had planned to make a stop to replenish water, feed and collect some animals. On October 2th they arrived in Gran Canaria and on October 5th they arrived in Gomera.

Two days later, on 7th October, they left for the Indias. Columbus distributed to the captains of the ships a closed sheet with the itinerary that should only be opened in case of a storm or catastrophe separating them from the bulk of the expedition. The admiral jealously guarded his secrets in order to ensure that he did not have any competition in his colonization of the Indias, he wanted the entire American monopoly for himself, but in the end, after a few years this was impossible to maintain. 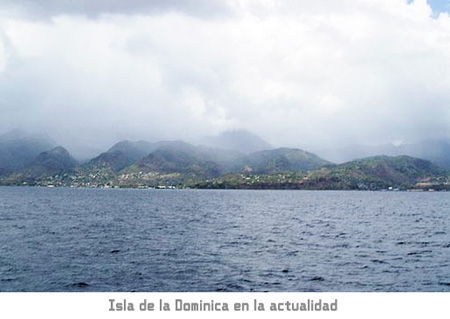 After a quiet crossing, only altered by a storm that did not pass to major storms, on November 2,1493 they spotted land, specifically the Dominica, at the eastern end of the Small Antilles. This time they did not stop to take possession of the new discovered land because they did not find any suitable place to anchor, but they continued sailing between these small islands, discovering the little island Marigalante, which took the name of the nao captain of the expedition, where they did disembark to take possession of it in the name of the Catholic Kings

They continued sailing north, meeting another large island, which they called the island Saint Mary of Guadeloupe. They anchored and disembarked in search of contact with the locals, but for the most part they fled to the mountains, leaving all their possessions and dwellings at the mercy of the visitors. Columbus, as on the first voyage, ordered his entire crew not to steal or break anything so as not to create a bad image of the Christians and to be trusted by the natives. In the shacks they found a great variety of fruits, herbs and plants, as well as different birds and domestic objects such as beds of cotton nets, bows, arrows and even a pot that looked like iron, whose origin could not be guessed because in the beginning in the lands so far explored did not know the metal.

They only managed to chat with some young people who had remained in the village who turned out to be slaves of the Caribbean, indigenous canibal Indians who had occupied those islands and routinely attacked the rest of the Caribbean islands. They told the Spaniards that they were not from there, but from Boriquén, the current Puerto Rico, and that they wanted to leave with them because when the Caribbean left they would return and probably, after sacrificing them, they would enter the menu.

On November 10th, after a problem with a small expedition led by the captain Márquez that was lost on the island, they returned to the discovery trail looking for the Hispaniola island and found more islands to which they were named: isla de Montserrat, Santa Marí­a la Redonda, Santa Marí­a de la Antigua, San Martí­n, Santa Úrsula and the Eleven Thousand Vir­gins, current Virgin Islands, and San Juan Bautista, current Puerto Rico.

On November 22th they arrived at the coasts of northern Hispaniola, specifically the peninsula of Samaná, where one of the Indians, originally from the region, who had taken to Castilla and that when he had become a Christian he would return to proclaim his new religion.