On the night of November 27th, the Castilian ships anchored in front of the place where they had built the fort almost a year earlier in the Hispaniola island. The darkness made it impossible to see if there were any dangerous elements in the water, so they decided to wait until the next day to get closer to the coast and disembark with the light of day. They saw no movement or lights on the ground, even fired their lombards and got no response. Before arriving in the area, specifically at the Monte Cristo Port, they saw two bodies floating in the water, looked like a young man and an adult but could not find out if they were Christians or natives because of their advanced state of decomposition. Within a few hours they found two other bodies being one of them bearded, which was an indication that they were probably Spanish, the Native Americans were imberbes. The worst omens were fought over the expedition. 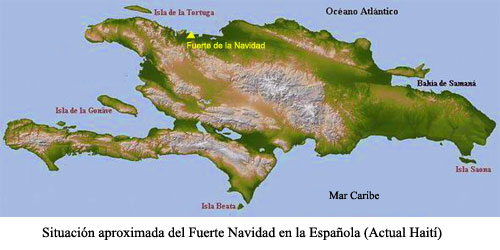 The next day several sailors disembarked and found the fort reduced to ashes and all scattered and broken around, but the Spaniards of the fort did not see any, neither alive nor dead, where were they?

These sailors went to report the situation to Columbus and the situation did not come down to check it until the next day. He made a tour around the area looking for Indians who could explain what had happened there, but they all fled to the jungle. Frustrated he returned to the nao Marigalante. Later, a canoe of the Guacanagarí- Indians arrived at the ships, explaining that the chieftain could not visit him because he was wounded and inviting him to visit him near his village.

Columbus came to the appointment anxious to know what had happened and found the chieftain lying on a stretcher with a bandaged leg. He explained that in the struggle to defend the Fuerte Navidad he was injured. The expedition doctor D. Diego Alvarez de Chanca offered to help him and examined him, but he saw no injuries. It might seem like he was pretending but the damage could be internal, though some suspected.

The chieftain told them that Caonabo, one of the most powerful chieftains of the island and of Caribbean origin, jealous of the power of the invaders, observed that the group left in the fort was divided in two by dissensions between them provoked by gold and women. One of these groups decided to leave the fort and go to the island where he was easily hunted by the warriors of Caonabo. Immediately they went to the fort to finish the task and the rest of the sailors who remained there next to Diego de Arana. Objective reached despite the support given by Guacanagarí to the Christians, whose village was also razed and burned, as Columbus could see when he visited it, dissipating the few doubts that he could have about the loyalty of the Taino chieftain.

They returned to the fort and the admiral wanted to check whether the murdered sailors had complied with the order to keep the gold they found in a well dug in the fort for this purpose. They dug to the bottom and found nothing.

These events were a serious blow to Columbus as he had reasoned hopes that those 39 sailors left at the fort would have advanced in exploring the area and made important discoveries. However, that turned out to be a failure against the Castilians and kings. His prestige began to fade.

In view of the obvious danger of Caonabo attacking the area again, they decided to look for a safer location to the east and found the first Spanish city in the New World: La Isabela.