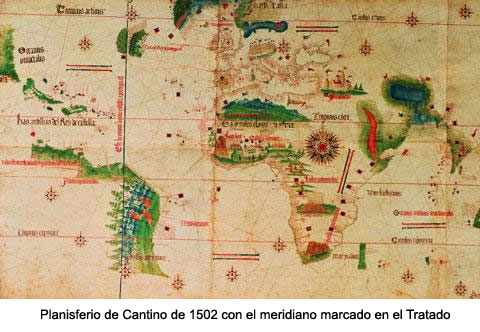 While Christopher Columbus was sailing in search of the firm land in Castile, one of the most important events in American history took place: the signing of the Treaty of Tordesillas.

Need to delimit the areas of influence

The Catholic Monarchs immediately needed to give juridical soundness to the discovery that was taking place in the New World. The news was running fast throughout Europe and soon the competition for these lands would become more difficult, especially on the part of the Portuguese, who disputed the Atlantic Ocean to the Castilians.

In May 1493 Pope Alexander VI had delimited the Castilian-Lussian influence zones by means of an imaginary line drawn a hundred leagues west of the Azores Islands and Cape Verde, corresponding to Castile all that is located west of it and Portugal to the east. But no one believed in it anymore and had to look for a new solution. This line needed to be defined and modernised. 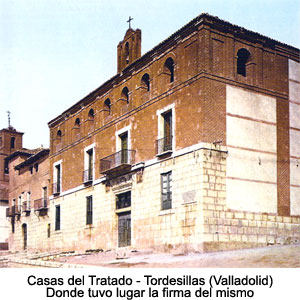 The meeting in Tordesillas

On June 7,1494, three Portuguese and three Spanish experts met in Tordesillas (Valladolid) and reached an agreement to move the old line to 370 leagues west of the Cape Verde Islands. In this way, and without knowing it, much of the future Brazil remained under Portuguese influence and the rest of America under Castilian influence.

This treaty was in force until 1777, when it was definitively annulled by the Treaty of San Ildefonso, which readjusted the borders of both countries in South America.