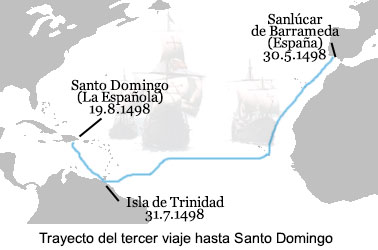 Columbus wanted to return quickly from Spain. He was also concerned about the general shortage of supplies on the island, which could lead to further rebellions and uprisings. To avoid these problems, he was able to overtake two ships in January 1498 under the command of Pedro Hernández Coronel that transported foodstuffs and more men.

He couldn’t leave until May 30th,1498. It was difficult to organize the expedition because the Catholic King demanded that a series of people be included in the expedition: 77 crossbowmen, 50 labourers, 15 sailors, 6 sailors, 6 sailors, 28 farm workers and horticulturalists and 2 women, as well as several religious, a doctor, a apothecary, an herbalist and several musicians. The majority were Andalusian and Castilian. There were rumors that the Spaniard was starving and had to work hard, people no longer wanted to join the expeditions and had to recruit several convicted criminals to complete the expedition, under commutation of their sentences. He also had problems to finance it because the Catholic Monarchs diverted part of the money allocated to the new expedition for the repair of the fortifications bordering France, so Columbus had to resort to the Genovese bank in Martí­n Centurión and Pantaleón Italian to pay for it.

The Catholic Monarchs confirmed to Columbus the privileges he already had for the capitulations of Santa Fe and it was added that the public treasury would pay 330 people residing on the island but the rest, up to 500, would be paid from the island’s own production. It was also granted the power to distribute lands among those willing to cultivate vines, orchards, sweet cane and other agricultural products but under the condition that they remain there for at least four years and if precious metals and Brazilian sticks were found in those lands the property of these would be owned by the crown. The way was opened for the creation of the Encomienda. 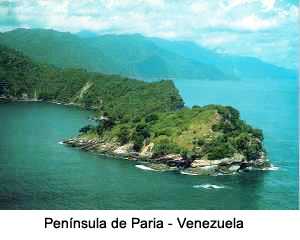 In this trip the admiral wanted to verify that under the Ecuadorian line there was a continent that according to the Treaty of Tordesillas would be within the Spanish influence. They sailed to the Canary Islands, where he sent 3 ships westward to bring more supplies to Hispaniola and take the road to Santo Domingo where Bartholomew Columbus was supposed to have already moved the population of the Isabella, and he continued with the other 3 ships to the islands of Cape Verde and then headed west on a straight line. A scientific theory of the time made him take this path: according to Jaime Ferrer, a great Mallorcan doctor and traveller, the areas where the sun’s rays fall perpendicular are rich in precious materials, drugs and spices. It’s tempting to check it out on site.

They arrived on the island of Trinidad on July 31th after a very long trip in which they almost ran out of food and had to change the course of the Ecuadorian coast and ascend a few degrees due to the extremely hot and humid environment that made a large part of the crew sick.

After passing by the islands of Tobago, Granada, Margarita and Cubagua finding a lot of pearls, gathering many and fixing already the idea of exploiting these rich areas and earlier than expected set out north to the Spanish where he arrived on August 20th,1498.

The vision of the huge, gigantic and dragging large quantities of fresh water from the mouth of Orinoco, led him to deduce that they had arrived at the much awaited continent, but they continued to think that it was part of the Asian continent.