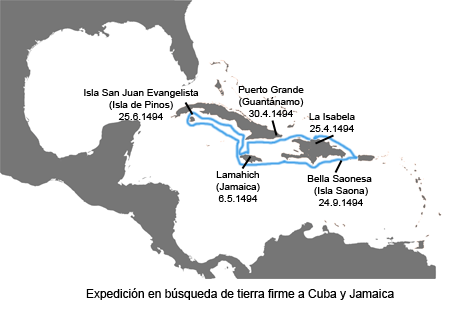 We find ourselves to April 24th, 1494, the situation in La Hispaniola islad is calm, Columbus and his people have advanced by its interior and discovered indications of the existence of gold in abundance. The settlement of the Isabela is developing and the great initial problems are more or less being overcome. Christopher Columbus created the first town hall headed by his brother Diego Colón and as assistants of the same, the father Buyl and Pedro Hernández Coronel.

But they know that where they are is an island and Columbus does not want islands, wants to reach the Asian continent. He continues with this obsession despite the evidence that everything they were seeing had nothing to do with the descriptions of Marco Polo’s east in his stories.

On that day, three caravels with ninety-six expeditionaries set off from La Isabela in a northeastern direction in search of that continent. Five days later, they were already in Cuba, in a large bay he called the Great Port, present-day Guantánamo, where they were supplied with water and fish offered by the natives themselves who believed them to be men sent by heaven to whom they had entertained and venerated. In Guantanamo they asked the Indians if there was gold in that area and they told them that there was no gold, but sailing five days south there was an island called Lamahich (Jamaica) where it was. 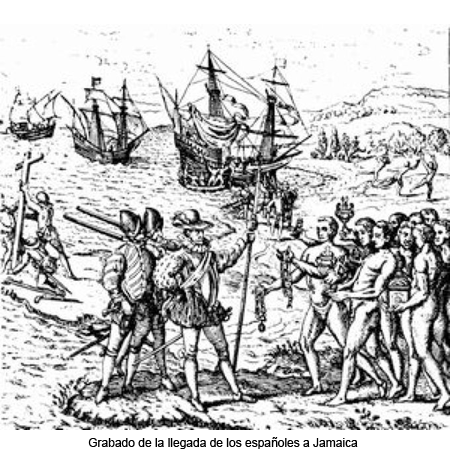 After four days of rest in Jamaican lands, they resumed the search for the continent and travelled several leagues along the Jamaican coast and seeing that the landscape was always the same, they decided to return to Cuba to continue sailing along its southern coast. Once there, they faced each other with an endless number of small islands, which the Admiral named the Queen’s Garden. Navigation became especially dangerous because in many areas the depth of the water was minimal and the caravels touched with their keel.

Thus, they walked for several weeks until they reached the island of San Juan Evangelista, present-day Isla de Pinos, where they replenished water and the admiral decided that if they had not found a way around Cuba it was because it was the mainland. He had his crew sign a document stating that this was the case and they turned around to return to Isabela.

On the return trip they circumvented Jamaica and passed through Hispaniola on the south as far as Saona island, where due to the bad weather they had to stay several days moored. Here Columbus observed an eclipse of the moon that he already had planned but deduced, thanks to his calculations, that it happened five hours and twenty-three minutes earlier than what was foreseen in Cadiz.

They moved to Puerto Rico, where, according to Hernando Columbus they wanted to explore the Caribbean islands but when Columbus fell seriously ill they decided to return to La Isabela as soon as possible. Where they arrived on September 29th, five months after their departure.

There he met his brother Bartolomé, whom he had not seen in five or six years, and who had just arrived at the command of three caravels, but he also encountered serious problems of indiscipline of some soldiers and an open confrontation with almost all the chieftains of the region.