To the rebellions of Bernal Diaz de Pisa and de Pedro de Margarit we have to add a new one, and only in five years of Columbus rule. This time he was a trusted person of Cristopher Columbus, Don Francisco de Roldán, native of Torredonjimeno (Jaén-Spain). He worked in his domestic service for many years, and little by little thanks to his cunning and dedication he was occupying different positions, always under the protective umbrella of the admiral, until arriving at the third most important position among the Spaniards of the island: major of the Hispaniola Island.

In 1497 the situation in the Isabela was disastrous, they had been without food for more than a year and there was no news from the admiral or from any Spanish ship. After the unhappy return of Boyl and Margarit, it was thought that their accusations against Columbus would have provoked his conviction and more than likely execution. All the more reason to think of the enquiries made by Judge Juan de Aguado in which the admiral did not stand up very well.

On the island were leading the advance Bartolomé Columbus as governor and Francisco Roldán as mayor of Hispaniola. The way things were handled and the harshness with which he treated the Spaniards raised many protests and disappointments. Given this state of affairs, Roldán began to seek the opinion of various people of his confidence with the idea of leaving the island as soon as possible or at least to take measures to improve the situation, one of the first being to remove the Columbus from power.

The trigger of the rebellion was Roldán ‘s request to refloat a caravel that Columbus had taken out of the sea at Isabela, probably as a precautionary measure to prevent it from being taken by the rebels, and so return to Castilla. Diego Columbus denied the request, arguing that the vessel did not have ropes or the necessary equipment for the voyage. The curious thing is that this ship had just returned from Xaragua to collect the tribute (cotton and cazabe) from Behechio and to transport these goods to the Isabela. This situation of confinement and not being able to leave the island convinced them definitively that there was something to be done. Diego Colon wanted to get rid of them by sending them to La Vega to demand a tribute from some Indians who refused to pay it. For Roldán, this was the perfect excuse to get lost on the island and seek support.

He sought these supports from the Indians, promising them that if they allied with them, he would take away the tribute they had imposed on them. He also toured the different forts built by the Spaniards offering them a change on the island. He was most insistent on the Concepción Fort, the strongest and best placed, whose governor, Michael Ballester, did not allow him entry and refused to listen. He dispatched several notes to Isabela so that the forward could be of help to her despite the fact that Roldán only went to negotiate with him and not to fight. 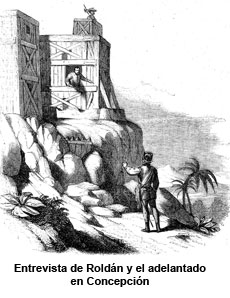 The interview took place from the fort window. In it, he explained his reasons for rebelling against the power of Columbus: hunger, poverty and mistreatment. The forward invited him to surrender himself to the Castilian laws and to fidelity to the Catholic Monarchs. But Roldán replied that he and his followers had not risen up against the royal authority or the laws of Castile, but against bad rulers who led them to ruin and death.

In view of the disagreement, Roldán left for Xaragua where they would establish their residence to see what could be done, although they had previously passed through the Isabela, where they were made with armament, tools, food and cattle that the Columbus kept in their stores. They marched and in their path they obtained numerous support among the local chieftains.

But an unexpected event was going to change the course of things: the arrival at Santo Domingo of the two ships commanded by Pedro Hernández Coronel that had departed from Cádiz before Columbus could leave on his third voyage and that transported food, soldiers and, most importantly, news.

– Second part of the Roldán Rebellion.

– Third part of the Roldán Rebellion .