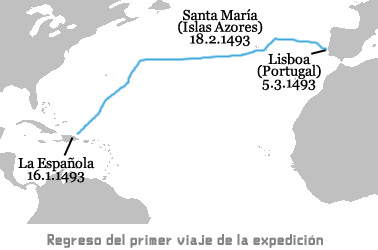 On January 16th, 1493 the fleet departed from Hispaniola Island to Spain. The route went north and northeast for twenty days, until February 4th when the admiral ordered a turn to the east, since it had reached the parallel of the Azores and from here the winds would be favorable.

The crossing was good until the February 13th, the day they entered a terrible storm that made them think of the worst, so they prayed and confessed to the impending disaster. The storm separated the two ships, which ended up arriving at different ports in Castilla.

But soon after a new storm was waiting for them, worse than the previous one and in which Christopher Columbus before the violence of the same one gave for sure his death and wrote a letter to the kings throwing it in a waxed barrel so that if someone found it would make it arrive and thus his adventures and discoveries would not remain buried in the bottom of the ocean.

They finally managed to get ahead and reach the altitude of Cascais on March 4th, at the outlet of the Tajo River, where a storm once again made them sink before the very eyes of the villagers who prayed all day long for that boat with the broken sails and could drift into the inlet and get safe.

After that, they spent several days in Lisbon where Columbus was honored by the Portuguese king John II. There it stayed until March 15 when it embarked for the port of Palos, the departure point of its expedition seven months earlier.

La Pinta arrived at the Peninsula in the port of Bayona, in Galicia. Leaving for Palos, where he arrived a few days later. His captain Martí­n Alonso Pinzón contracted a disease in Hispaniola that killed him a few days later in his hometown.