After the first contact with the land and with some natives, the ships began a journey through all the small islands that were found. They did not believe what they saw, that must have been the closest thing to the paraíso: blue waters, white beaches and lush vegetation. They sailed along the paths of indigenous canoes to ensure that they did not collide with the treacherous coral reefs that bordered the coasts and prevented the waves from reaching the beaches where vegetation could grow without any opposition.

Columbus was convinced that they had arrived at the so-called Seven Thousand Islands that Marco Polo narrated in his stories and that they preceded the Asian continent. There you should find the coveted gold and spices and the Grand Khan with whom they were supposed to meet and pay him respects from the Catholic Kings. 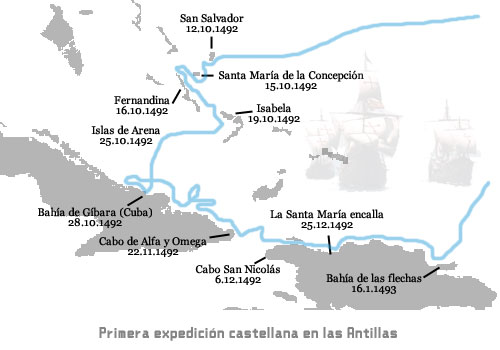 In a few days they visited and named numerous islands: San Salvador, Santa Marí­a de la Concepción, Fernandina, Isabela, etc. They arrived in Cuba on October 28th, an island baptized with the name of Juana. The admiral thought it was so big that he believed without a doubt that they had arrived on the continent, claiming in his Diary that they were between Zaiton and Quinsay, legendary Chinese cities.

Columbus’ first impressions, despite what he left in his Diary, must have been disappointing, since they were supposed to have arrived in a rich land, with rich inhabitants, sumptuous and large cities, and until now they had only seen poor, practically naked people who lived in small villages and did not even know the iron, when in Asia this metal was used since centuries before.

He assumed that inland it would be easy to find something of interest and so he sent four emissaries to explore the interior of Cuba: two Spaniards, Rodrigo de Jerez and Luis de Torres, the latter translator of Chaldean, Hebrew and some Arabic, and two Indians, one from the island of San Salvador and another from Cuba itself. After several days of marching, they returned on November 6th with poor news: after walked tens of kilometres away, they found several villages of no more than fifty houses, somewhat larger than the coastal ones but equally small. They said that the Indians had treated them extremely hospitable and believed that they came from heaven, sent by the gods.

The exploradors always asked the natives that they saw with some small piece of gold or silver where he had taken it from and there was almost total unanimity in pointing to the southeast, where they said that there was a great island where gold could be collected with the hands of the riverbanks. That is why they continued sailing in a southeasterly direction towards the island known by the natives as Haiti­.

On November 22th without warning Martí­n Alonso Pinzón and the Pinta disappeared and continued the expedition on their own, leaving Columbus materially stranded in Cuba. It hadn’t been known never the motives of this maneuver, but it seems that he wanted to get ahead of Columbus in finding gold and Asian wealth.

After several days in which they could not navigate through currents and contrary winds, Columbus’ ships spotted the aforementioned island of Haiti, specifically on December 5th, which is named after the Hispaniola island. Officially Columbus is the discoverer of the Haitian island, but if we consider that Martí­n Alonso Pinzón left them behind, he should be the authentic discoverer and the first European to see its coasts.

On this island were tribes more organized than those that had previously been able to see, in it they met the cacique Guacanagarí­, which welcomed the Spaniards very kindly and indicated to them the same as the rest of natives, that in the interior there was a scrumptious region in gold and other minerals called Cibao. Because of his phonetic resemblance with Cipango (Japan) he made Columbus think that he was finally in Asia.

They continued to skirt the Haitian coast, passing by the Tortoise Island and a few miles later, in one of their night stops, specifically on the night of December 25th, due to the calm of the sea and the fact that they had already investigated the area well, they left a cabin boy in charge of the nao Santa Marí­a. The inexperienced sailor was unable to stop the ship from drifting to a sandbank where it was stranded. They would remain there with the mission to continue exploring the interior of the island in search of the Cibao and to establish relations with the local Indians. Columbus would thus be free to continue exploring and then return to Spain to tell everything he had seen and lived on this first expedition. 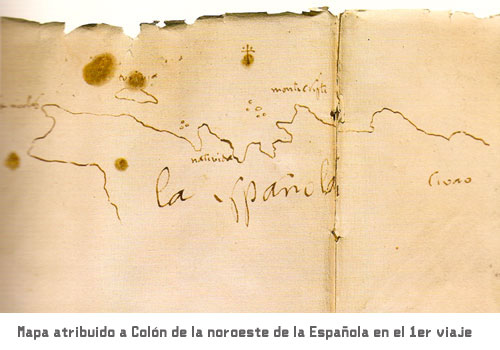 On January 6th, as they were bordering the coast in search of an optimal current for the return to Europe they met with the Pinta and her captain Martí­n Alonso, who apologized, arguing that the ship separated from the other two without wanting to be noticed and that when they wanted to realize it was too late to meet them. Columbus accepted the apologies since two ships were better than one to face the return trip that awaited them.

The two ships continued their exploration of the north coast of the island until they reached its eastern tip, until arriving at the Flechas bahi­a, present-day Samaná, where they set off for Spain after almost three months in the Indies.