The Discovery of America took place on October 12th,1492 during the first Christopher Columbus trip to American lands. Although the real intention of this trip was to find a sea route to Asia and have direct access to its markets eventually became one of the greatest feats of world history. Columbus tried to cross this continent in some trips more but he never made it. After the preparatives of the last months the trip began on the morning of August 3th, 1492 the three Castilian ships departed from the port of Palos (Huelva – Spain) in the direction of the Canary Islands. After a peaceful trip on August 9th, they arrived at La Gomera where several repairs and the last supplies were carried out with a view to the hardest part of the journey. 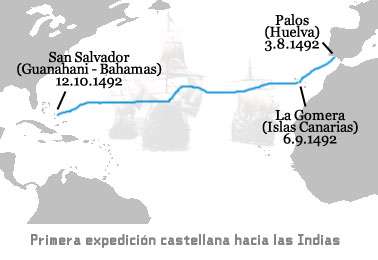 Colon, according to his calculations, knew that before arriving in Catay (China), which was about 6500 kilometers west of the Canary Islands, he would encounter the island of Cipango (Japan), about 2100 kilometers closer. And that he would arrive at these following the same latitude, that is, sailing in a straight line towards the west. Before leaving, he told his crew that the trip would be about 750 castilian  leagues Spanish (6000 km referred to above).

The repairs and supplies of this first voyage of Columbus had them entertained in the Canary Islands until September 6th, when they finally left for the unknown. A few days later Columbus began to write down in the official navigation book less miles from the actual voyages. He used this trick to have a sufficient margin of error in his calculations so that the crew would think they had traveled less distance from the real one. Although this idea is a bit crude and hard to believe, since experienced sailors such as Martí­n Alonso Pinzón, Vicente Yáñez and Juan de la cosa, who captained the two caravels, I don’t think they fell into such a simple ploy. 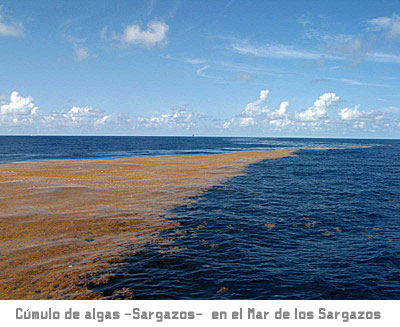 The ships were gently pushed by the trade winds until they reached the limits of the Sargasso sea where they saw abundant concentrations of seaweed floating, even with small animals in them, which led them to believe that they were near land. It wasn’t until September 25th that Martí­n Alonso Pinzón said he saw land, but they turned out to be low clouds. By that date, the 4500 kilometers of travel had been exceeded, so the pre-Asian islands must have been about to appear on the horizon.

On October 7th, at the request of Martí­n Alonso, after observing a bird flight, he ordered a change of course to the 24th parallel, which would lead them to meet the islands of today’s Archipiélago of the Bahamas; if they had followed the established plan, they would have arrived at the peninsula of Florida.

They were looking at grass for several more days until the October 8th  when it suddenly disappeared. They had made it through the Sargasso barrier.
On this first voyage of Columbus they had been travelling for more than a month and had not yet found land, the seafarer began to become nervous and to request the return to Spain. Columbus, who was sure that they were going to find it very soon, asked them to put up with three more days and if they don’t find land in the next few days, they would return. But in no case was there a motive on board, only ramblings and some complaints.

On October 11th, they already saw evident signs of land on the sea and in the early morning of the 12th Columbus said he saw a distant light moving in the darkness. At dawn of the day, when it was beginning to lighten, next the sailor of Pinta, Rodrigo de Triana, gave notice of land, but Columbus was assigned the prize promised by the Catholic Kings, 10,000 maravedíes for which he first saw land, alleging the tale of the little light. Without knowing it, they had starred in one of the most important events in world history: the Discovery of America.

They docked on a small island called by the natives Guanahaní and was christened by Columbus as San Salvador, a name that is still used today in spite of the fact that most of the surrounding islands have English names.

By pure accident, looking for a route to Asia Christopher Columbus and his men encountered an obstacle they could never overcome: the American continent. He tried again in three times without success. The American continent had been officially seen for the first time by a European. This news spread rapidly around the world.