Columbus before departing on his journey of search of the mainland left orders to his brother Diego and to the Aragonese captain Pedro Margarit of what should have been done while he was out. 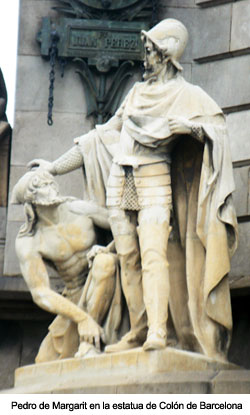 The captain was instructed by the captain to parade through Hispaniola causing as much jalousy as possible to attract the attention of Indians and astonish them by showing modern European weapons, horses and their supposedly superhuman nature. Once attracted, they should be treated in a friendly and generous manner to show their benevolence and thus be treated as allies rather than enemies. This technique was the one that Columbus followed in all his visits to the Caribbean and worked well for him, except in some isolated cases.

The other objective, apart from impressing the natives, was to explore the rest of the beautiful island in search of its natural riches, make a general recognition and obtain reliable data for its colonization.

Margarit left for the planned military parade and left Alonso de Ojeda in command of the fort of Santo Tomás. Instead of obeying the orders of the Admiral decided on his own account to go to the rich plains of the Vega Real and visit the Indian villages scattered around it. The Indians treated them generously as usual, but seeing that the expeditionaries did not leave, but asked them for more and more, and showed themselves to be excessively profligate with their wives, they began to worry and bother with their presence.

These facts reached La Isabela and Diego Columbus wrote to Margarit warning him about his behavior and ordering him to follow the original plan. The answer was overwhelming: was considered independent in his command; and his position, noble origin and the King’s favourite position legitimized his decisions and actions. It was a rebellion of the nobility against the power of the Columbus. Previously, there had already been a attempted rebellion starring Bernal Dí­az from Pisa but it was quickly suffocated.

The problem was amplified when the knights, hidalgos and adventurers resident in Isabela supported Margarit in their decision. These considered the Columbus to be foreign liars and mercenaries who carved out their fortune at the expense of their hard work when they had been told about magnificent riches and good life. BoilHe also received the support of Father Boil, head of the religious community and Vicar Apostolic of the New World. The nobility and the clergy let their voices be heard for the first time in America.

They wanted to return to Spain and reveal to the king what was really going on in Hispaniola and to discover to the whole world the lies and misdeeds of the Columbus. They finally seized some of the ships from the port of La Isabela and marched back to Castile before Columbus returned.

First consequence: The Castilian troops while Columbus was travelling and Captain Pedro Margarit fled became a headless army that did what he wanted. They provoked the justified anger of the Indians who, fed up with these excesses and seeing the Spaniards divided into small and defenceless groups, took revenge on the affronts and were annihilating them little by little.

The Cacique Caonabo, author of the massacre of the Spaniards of the Christmas Fort, planned to clear the island of foreigners besieging the fort of Santo Tomás, but there he encountered a stumbling block with which he did not have: the captain Alonso de Ojeda.