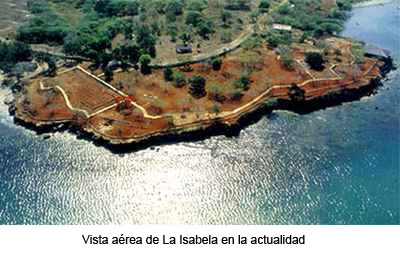 With the news brought by Alonso de Ojeda and Gorbalán Christopher Columbus was calmer, it seemed that his plans were taking shape in spite of the fact that he did not yet see a single sign of what was seen and narrated by Marco Polo in his stories of the magnificent and very rich Asia.

Moreover, what was supposed to be an expedition aimed at enriching Castilla had not only not found anything really important, but the materials and supplies he had carried were running out. He had no choice but to send twelve of the seventeen ships back to Cádiz captained by Antonio de Torres to arm a new fleet with new gear and thus by the way he was also rid of a good number of possible opponents and drastically reduced the needs of the city. For the time being, the trips of Columbus would continue to cost Castilla and its investors money.

But Columbus tried to make up the results obtained with new promises and good omens using Ojeda’s observations as a guarantor of success. He wrote a memorial in which he asked the kings for everything he considered necessary for the success of the mission and in view of the scarcity of the gold found, he insinuated the possibility of using the “bad” Indians, that is to say, the Caribbean Indians, enemies of the “good” Indians, the Tainos, as slaves to begin to obtain immediate profits. This idea did not please the reina Isabel, who considered all Indians as subjects of the crown, and therefore, free people.

The atmosphere in Isabela was getting worse. The knights, craftsmen, farmers, etc., who had dreamed of finding the land promised by Columbus full of riches had become a hard land that had been transformed and worked day and night, the illnesses began to make a dent in them and the desperation to see that all their illusions were going to disrupt the confidence and popularity of the Admiral, who they began to accuse of being a liar and of having brought them into such a situation by deceit.

The first rebellion against Columbus took place a few months after the arrival at Isabela. At the end of February 1493 Bernal Dí­az de Pisa, counter of the second voyage, after the departure of Antonio de Torres’s fleet formed a faction that, taking advantage of Columbus’s illness, wanted to take one of the five ships that remained in La Isabela and thus return to Castilla where they accused Columbus of being a liar and manipulator.

Columbus discovered the plot and ordered the leaders, who were confined to one of the ships, to be arrested. All existing weapons and ammunition were stored in the captain ship for better surveillance and could not be used against it. Various writings of the rebels against Columbus were also found, criticizing his ideas and his administration of the city. They intended to turn them over in Castile as documentary evidence for trial.

This was the beginning of a certain inadmersion of the settlers against the admiral, feeling that also reached Castile, where the fame of the Admiral began to decrease.