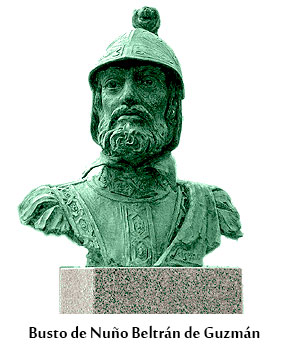 Nuño Beltrán de Guzmán, born in Guadalajara (Spain) in 1490. He was appointed governor of Panuco in 1525, a territory taken from its discoverer and conqueror Francisco de Garay. He marched to his governorate and once there and because of the rivalry between the king and Hernán Cortés he was appointed president of the first Royal Audience created in the continent (the first in the New World was Santo Domingo), the Royal Audience of México, created to control de goverment action of Cortés and to be used as a counterweight to his power.

From the beginning, as governor of Pánuco, he acted with a lot of violence against the natives who did not collaborate with him. All for obtaining data on the existence of great wealth. He openly confronted Hernán Cortés, who he accused of mistreating the Indians, but the king finally agreed with the extremeño, who he named Governor General of Nueva España. He also had quarrels with the Bishop Zumárraga, who was in charge of the position of Protector of Indians, who denounced and excommunicated him.

All these events led him to leave Mexico and seek his own fortune in unexplored territories. He prepared an expedition of 300 Spanish soldiers and 8000 allied Indians. His lieutenant was Cristóbal de Oñate and his field master Antonio de Villarroel. They left Mexico in December 1529 in the direction of Michoacán, in January 1530 founded Santa María de la Purificación on the shores of Lerma river. From here they entered the chichimeca territory formed by the regions of Colima, Jalisco, Tepic, Tonalá, Chiametla and Culiacán. They did not find gold or silver, which made them follow the march further north, arriving in Guanajuato, a fertile and populated region.

Beltran’s military strategy was to set fire to the villages that were taken to avoid being attacked by the rearguard, although he excused himself with the allied Indians, who he said were carrying out these dirty tasks. He did so in Cuyna and Cuitzeo. The Lerma canyon then followed, fighting the cocas and the tecos. Found greater strength in Tonallan. He crossed the river Santiago and entered the caxcanes territory. He destroyed Nochistlán and El Teúl, and from the latter point of view he went to Nayarit, passing through the lands of Jalisco and Colima, which had already been subjected to Sandoval and Alonso de Avalos. The overseer and former governor Peralmíndez Chirinos, made an expedition to Zacatecas by order of Nuño de Guzmán. The latter continued until Jalisco, which he conquered and destroyed. He then went to Tepic and continued along the coastal lands to the northwest. In Atecomatlan he had to fight a difficult battle, which he won nonetheless.

Nuño founded two provinces: Cuiliacán and Chametla that together with the present provinces of Sinaloa, Jalisco, Aguascalientes, Zacatecas and San Luis de Potosí formed the new kingdom which he gave the name “Conquista del Espíritu Santo de la Mayor España” but which the Queen of Spain Juana I of Castile who ruled on behalf of the absent Charles changed to “Reinoi de la Nueva Galicia” and ordered him to found a city with the name of Santiago de Galicia de Compostela as capital of the new kingdom.

These territories conquered by Nuño de Gúzmán opened the way for further explorations to the northwest of New Spain and to the southwest of the current United States. He also founded the cities of Guadalajara, Culiacán Sinaloa and Tepic Nayarit.