The name “Seven Cities of Cibola” comes from the early sixteenth century, specifically 1508, the year in which the book of chivalry of Amadís de Gaula was published in Spain that narrates the Muslim invasion of the Iberian Peninsula, seven bishops fled Spain with a fabulous treasure and took it to the lands across the sea. There they founded seven cities of golden houses, the Seven Cities of Cibola full of gold and silver and great riches. This was a myth very similar to the Dorado and that spread by word of mouth in each of the expeditions organized in New World. The dream and the goal was to find him, at any price. 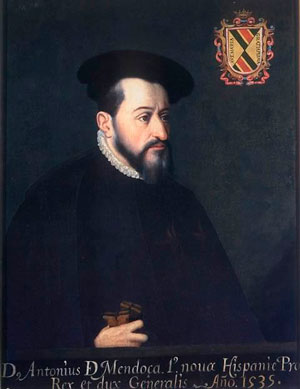 In 1536, the 4 survivors of the Panfilo of Narvaez to Florida Expedition, among them Álvar Núñez Cabeza de Vaca, arrived in Mexico. They met with the virrey Mendoza and told him that they had heard many Indians talking about big and rich cities but that they never got to see. Even with the doubts of the survivors, the viceroy was impressed and organized a small expedition of several Franciscan religious and a group of Mexican Christian Indians. In this way and in a very cheap way he could confirm if the data told by Cabeza de Vaca were true.

They departed Culiacan in March 1539 and marched north in search of the Seven Cities of Cibola. On this expedition, the black Estebanico, who wanted to be the first to find riches, marched ahead of the religious to take all the merit and appear as their great discoverer. The adventure cost him his life when he was captured and murdered by a group of Indians from the zuñi village of Hawikuk. The rest of the Indians who accompanied him returned in terror with the religious to Nueva España.

The expedition was a failure, they could not find anything worth mentioning and this would most likely paralyze the organization of new expeditions to the north. But one of the religious participants called Fray Marcos de Niza thinking about the evangelization of these lands decided to invent a fantastic story by saying that yes, he had seen Cibola, that it was a city like Mexico full of emeralds and other jewels and that gold and silver were more abundant than in Peru.

“… I followed my path to the view of Cibola, which sits on a plain at the side of a round hill. It has very beautiful town peers, the best that in these parts I have seen; they are the houses by the way the Indians told me, all stone with their leftovers and azuteas, to what I resembled from a hill where I put myself to the wind. The population is larger than the city of Mexico…”

Why did he do this? Probably because the religious at that time were forbidden to travel alone, much less on expeditions to unknown lands, and it was obligatory for them to be accompanied by soldiers, leaving their task of evangelizing subject to the discretion of government permission and the presence of weapons. That is why, by inventing this story, he would be able to travel and evangelize those lands where the “new kingdom of St. Francis” is supposed to be located, as he called it.

The false testimony of the friar immediately provoked Viceroy Mendoza to begin preparations for a great expedition led by Francisco Vázquez de Coronado which would lead the deceitful friar as a guide.