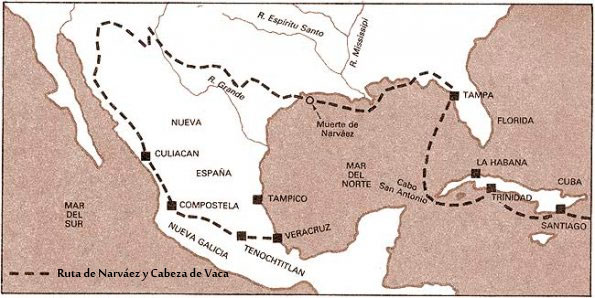 Panfilo de Narváez, Segovian born in 1470. He served the Governor of Jamaica, Juan de Esquivel, and then marched to the Hispaniola Isle where he was appointed lieutenant of Diego de Velázquez with whom he participated in the conquest and colonization of Cuba.

When Cortés betrayed Velázquez, he sent him to Mexico to capture the spanish conqueror, but he was defeated and captured in Veracruz where he was held for almost 2 years.

At this point, after 14 years since the first time that Ponce de León set foot on the North American lands, practically all its coasts and rivers were known, but this was the only thing, the interior was not yet known despite the legends and myths that were among the sailors.

Narvaez, after being liberated by Cortes, was named adelantado and governor of all lands from river of the Palms and Florida by spanish king Carlos I and gave him permission to organize an expedition of exploration of the interior of Florida in search of great civilizations and riches. He ordered him to found at least two cities with a hundred neighbours and to protect them with two coastal fortresses. This was one of the longest and most impressive explorations in human history. Its surviving members crossed all the southern states of today’s United States, northern Mexico and Texas and discovered the gigantic Mississippi River.

Narváez did not take long to prepare it and set sail from Cádiz on June 17,1527, commanding a fleet of 5 ships and 600 men, 450 soldiers and 150 sailors, wives and servants. After a stopover at Canary Islands to replenish themselves with water, wine, firewood, meat and fruit, they jumped across the ocean in the direction of Santo Domingo. Arriving at the Ozama river in this city, more than 100 soldiers deserted because of the news that had come from the Lucas Vázquez Ayllón on the east coast of North America, where only 150 of the 600 who departed returned alive. Despite these setbacks they continued forward, this time stopping in Santiago de Cuba from where they sent two ships to the city of Trinidad in Cuba to collect horses and other supplies but a hurricane surprised them, missing both ships with 60 men and horses. 4 months later in Cienfuegos (Cuba) they bought several ships and recruited more men but when they departed they found sandbanks in the Canarreos archipelago, near the Cuban coast, being trapped there for almost 3 weeks and not being able to leave until a storm raised the water level releasing them. Anyway, one disaster after another. 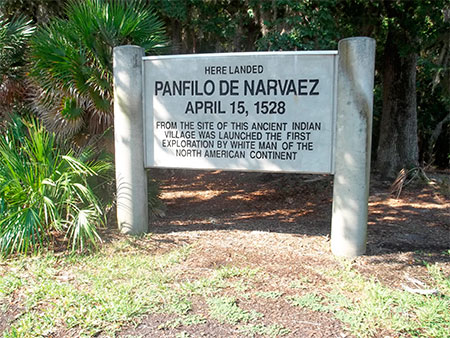 They did not reach their goal, the Florida coast, until April 18th,1528 with half the crew and few supplies already. They disembarked west of Tampa bay and entered inland by taking possession of the land in the name of Castile and its emperor. The battles with the natives were constant, there was no way to establish a fort or a point to resist so they continued with the search for cities and rich kingdoms in the style of Tenochtitlan where they could enrich and prosper.

On May 1th, 1528 Narvaez decided to divide the expedition into a land and maritime contingent, but the two units never met again. The terrestrials continued northward along the Withlacoochee river, meeting the timucuas Indians and further north with the Apalachee. With the former there was no problem, but with the latter they were attacked with rapid charges and against which they could hardly answer for their speed. They spent several weeks in which Narvaez sent several small expeditions to the surrounding areas in search of a bigger city or signs of some important civilization but they found nothing, only swamps, quicksand and hostile Indians.

They found out that in the south there was a people called autes that had a lot of food at their disposal, so they decided to march there besieged in their rear by the apalachees. When they found the autes their village had been burned and abandoned but they still managed to get food supplies. They stayed there while they were building small brigantines to navigate towards the sea along a river that was there. They had lost all hope in the land exploration and only saw their salvation possible by going down the river and reaching the sea to meet those who remained there. Once they reached the shores of Gulf of Mexico they set sail for New Spain but a brutal storm off the Mississippi delta separated them and sank them.

This supposed the end of the expedition for Narvaez and the vast majority of those who had survived the catastrophe of this first expedition to North American lands. Only a few would remain commanded by Cabeza de Vaca.

Álvar Núñez Cabeza de Vaca, born in Jerez de la Frontera (Cádiz – Spain) in 1507, was the expedition’s treasurer and sheriff. Narváez ordered him to command the maritime part of the expedition, waiting to meet while they explored those untamed coasts. Once the 15 survivors of both hosts joined together, they arrived at the so-called Isle of Evil Hado where they took refuge. There only poor Indians lived there, feeding on roots, berries and fish that helped them survive until spring. Thanks to their knowledge of medicine, they gained the position of healers among the Indians they treated and also manipulated once they knew all their superstitions. At one point when Cabeza de Vaca was ill, thirteen of the survivors decided to leave the island and leave him there. Of these thirteen, only three survived, the only ones who did not fall into the hands of the Indians who surrounded and murdered them.

Cabeza de Vaca was used as a slave in simple tasks because his weakness did not allow him to do much more. Thanks to this, the Indians hardly took him into account, they saw no danger in him. Álvar took advantage of this opportunity to gradually get to know and explore the surroundings in which his tribe lived. He established commercial relations with inland villages to which he sold coastal products, and with inland coastal villages. These trips allowed him to explore territories that could reach as far as Colorado since in his book Náufragos y Comentarios he talks about them and describes them perfectly. It was prospering and little by little it was gaining the respect of the natives. Several years later, in 1534, he met the other three survivors of Narvaez’s expedition to whom he instructed in the medicine he practiced for the Indians and decided to leave.

They traveled all the way through Texas to the outskirts of New Spain, where they began to hear about strange bearded men sent by the sky. They were able to contact a group of Spanish soldiers who were looking for slaves in Mexico in the area of Sinaloa. Captain Diego de Alcaraz was in charge of signing a paper that gave credit to Cabeza de Vaca and his companions and on May 1th, 1536 they arrived in Culiacán where they were received by Melchor Díaz, they continued on their way to Compostela, capital of  Nueva Galicia, and finally the arrived in México City where they received a magnificient welcome . There they recounted their adventures and awakened the dreams and the desire for adventure of new adventurers willing to leave the skin to conquer and colonize new lands and new riches.

Of the initial 600 men eight years later, only 4 survived. This is a clear demonstration of the difficulty and sacrifice that the exploration and conquest of a distant territory can bring.