Vasco Núñez de Balboa, from Jérez de los Caballeros (Badajoz – Spain), had crossed the Caribbean coasts in 1501 with Rodrigo de Bastidas. With the benefits he obtained in this expedition he bought several properties in Hispaniola Island where he worked as a farmer without great adventurous pretensions but things did not go well, he began to accumulate problems and debts.
His financial situation became disastrous, his creditors were constantly harassing him and he decided to apply one of the best methods of avoiding debts: to disappear. Being in Santo Domingo one night hesnuck in as a stowaway on one of the ships that were part of the expedition that captained Martí­n Fernández de Enciso with the aim of bringing supplies and weapons to Alonso de Ojeda, which at that time was having a hard time in San Sebastian de Urabá. As we said in another entry Enciso discovered him and instead of punishing him, very prudent used him for the benefit of the expedition for his previous experience. 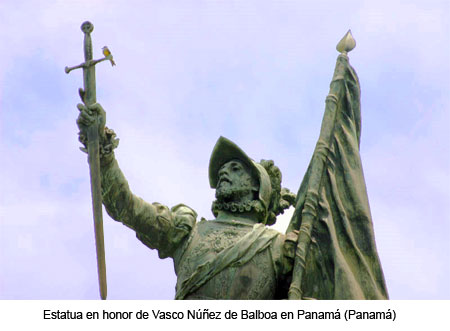 They arrived in Cartagena where they met with Francisco Pizarro and the few survivors of Ojeda’s expedition who left the village of San Sebastian because neither it nor Enciso arrived to help them.

Together the two expeditions departed for St. Sebastian but Balboa recommended not to set up there but on the other side of the Gulf of Urabá. He was already there with Bastidas and it seemed like an ideal place. Arriving at the chosen site, they had to face the cacique Cémaco whom they defeated not without great suffering and founded the population of Santa María de la Antigua del Darién.
All these actions were gradually giving more charisma and authority to Balboa among his comrades and on the contrary Enciso lost it by leaps and bounds, and he also took certain measures regarding the distribution of the gold found that were cause for protest by the colonists. Enciso had not fallen in that where they had built the new population was within the jurisdiction of Veragua , the governorate of Nicuesa, and therefore he as Mayor of Ojeda had no legitimate power. This was very skillfully used by Balboa calling the town hall and proposing that Enciso be expelled and he was elected Mayor. Measures that were taken immediately. They put the former mayor Major on a ship and he was sent to Spain. This measure is somewhat counterproductive because, as it would later appear, Enciso once in Castile acted against Balboa, generating a bad atmosphere against him and, what is worse, generating the initial inadmersion of the rey Fernando.

After a few months the situation of the colony was not good, the illnesses and hunger began to affect its inhabitants. Coincidentally, two ships arrived there with provisions commanded by Rodrigo de Colmenares, lieutenant of Nicuesa, who, seeing the poor condition they were in, suggested that they accept the governor as a legitimate councillor before he found out that there was a population on their lands without his permission. Initially Balboa and the others agreed, this would mean normalizing the situation and probably in some way would benefit.

Informed Nicuesa sent several soldiers and a spotter named Juan de Quinceda to the Darien, who were like a forward. This seer informed the settlers that Nicuesa had not been very amused by what had happened and unilaterally had appointed a new mayor and councillors for the Darién who would arrive in the following days with him. The conflict was served, they quickly met and decided not to allow him to carry out his will. When he arrived at the Darien, he was only allowed to land outside the village and was later taken up with a few other soldiers on a ship that had been manipulated to sink into the high seas. After that day, Nicuesa was never found.

Balboa was automatically appointed governor of the Darién province by his subordinates and confirmed by the virrey Diego Colón from Santo Domingo, content with what had happened since Nicuesa and Ojeda were chosen by the king against his will. Likewise, King Ferdinand confirmed Balboa on December 23,1511 in his office.