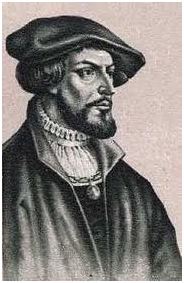 Death: July 28,1527 in Santiago de Cuba. He died from the wounds sustained in an attack on him by his lieutenant general, Pedro de Villafuerte, in Santa Marta. Returning to Santo Domingo to heal the winds, they took him to Santiago de Cuba where he died.

– He was a Spanish conqueror and explorer of the north coast of South America, traveling along the coasts of Venezuela, Colombia and Panama with Juan de la Cosa.

– Governor of the territory between Cabo de la Vela and the mouth of the Magdalena River.

– In 1524 he founded the city of Santa Marta on the Colombian coast.

– He discovered the mouth of the Magdalena River and was the first to arrive at the bay of Cartagena de Indias, which he called Golfo de Barú.

– Participated in the Second journey of Christopher Columbus to the Indies in 1493.

– On June 5th,1500, he was granted a licence to discover islands or lands not visited by Columbus or other navigators, as well as lands not belonging to Portugal.

– In 1501, he toured Panama and much of the Colombian territory.