In 1508 took place the transcendental Junta de Burgos in which the king Fernando el Católico named the navigator Américo Vespuccio and Pilotos Reales as Chief Pilot to the explorers Juan de la Cosa, Juan Díaz de Solís and Vicente Yáñez Pinzón. In this meeting, the aim was to consolidate the Castilian domain in the new discovered lands and to find once and for all the passage towards the Indies.

In order to consolidate the conquest, the governorate of Urabá or Nueva Andalucí­a was handed over to Alonso de Ojeda, which included from cabo de la Vela, to the north of what is now Venezuela, and to the north of the present Venezuela. These areas had already been visited repeatedly in search of gold and ransoms, but their conquest and colonization had not yet been considered. The signs of gold and pearls helped to make this decision, as well as the need to find the step towards Asia which searched Christopher Columbus and other expeditionaries. 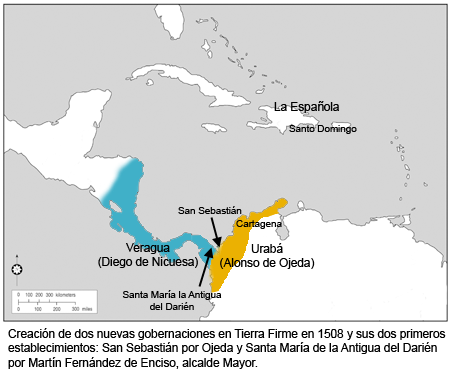 Ojeda managed to gather in Santo Domingo 300 men, two brigantines and two small boats. On November 10th,1509, they departed from the Ozama to the island of Jamaica to replenish water and supplies.

They crossed the sea Caribbean and arrived at Cartagena where Ojeda had already had a negative experience with the natives, much more surlies and bellicose than those that had been found in the antillean islands. So he received royal permission to wage war with them, which even though it may not seem like very good news, it was because he could make slaves among the captured enemies and sell them as such. One of the most succulent businesses that could be done at that time in the Indies.

Juan de la Cosa advised him not to stop there because of the danger of those Indians. They used poisoned arrows in a massive way, against which the Spaniards could do practically nothing. But Ojeda ignored him and they stood there. Soon after, a very hard confrontation took place in the village of Turbaco against the natives and a large part of the Spanish expedition was massacred, including Juan de la Cosa himself. This meant a major setback for the expedition, leaving it battered and disoriented in hostile territory.

Shortly afterwards, the bailout Diego de Nicuesa, who had also been in charge of forming a governorate but more to the north, appeared in the so-called Castilla del Oro or Veragua. Together they attacked the town of Tubarco again and razed it to the ground, killing all its inhabitants and burning their shacks. In those days revenge was commonplace, well, and now.

Once the river was found with its golden metal, the first serious establishment was created in Tierra Firme, but it was not easy for them. They sailed and sailed along the isthmus lands and did not come across the river. 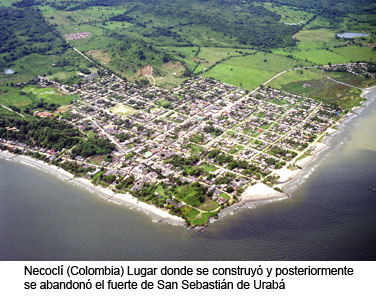 Seeing that the search was lengthening, they decided to create a first settlement in Tierra Firme: the village of San Sebastián, on the eastern shore of the entrance to the gulf of Urabá. They built it near several indigenous tribes with which they tried to relate and thus obtain food and information about possible gold mines, but the reception was always the same: hostility and poisoned arrows.

Time went by, we are now at the beginning of 1510, and supply problems began to arise. Casualties were produced daily by eating unknown foods that their bodies did not admit well, as well as by the attacks of the natives. Ojeda had commissioned Martí­n Fernández de Enciso, his major mayor, to arrive at the place of his choice some time after his departure with provisions and supplies but this one gave no sign of life. The situation became increasingly unsustainable. The soldiers began to protest because they had to do something and not let themselves die there.

Two brigantines were stolen in the area from Hispaniola Isle by the pirate Bernardino Talavera. Ojeda negotiated with this criminal and they left for Santo Domingo to look for those supplies and tools that they needed so much for the construction of the new settlement. In his absence, he appointed as captain and lieutenant, Francisco Pizarro, who was already beginning to build up a magnificent reputation as a man of arms in the New World.

Ojeda and Talavera could not go to Hispaniola because of the pirate’s harassment of the justice system of Diego Columbus for what they had to deviate to Cuba, where they were shipwrecked and lost by immense swamps and marshes. Many expeditionaries lost their lives. There they were well received by the natives who, seeing them in such a bad state, took pity on them and offered them lodging and food. They passed by with these hospitable hosts until they found the strength to continue. Going to the island of Hispaniola was not going to be possible, so a few men were sent to Jamaica to ask for help and protection from Esquivel, the governor of the island. The latter, who was very old, sent them a caravel under the command of Panfilo de Narváez who rescued them and took them to the small Caribbean island. From Jamaica they were sent to Santo Domingo where Bernardino de Talavera was captured and hanged and Ojeda could not organize a new expedition to help his men because of the ruin and misery in which he fell.

Meanwhile, Francisco Pizarro and the rest of the men waited for five months for the rescue of Ojeda or Enciso in the San Sebastian fortress, but since neither of them arrived, they decided to dismantle the fort and with the two brigants who had to leave the new governorate. On the way to Cartagena one of the ships sank with all its crew and equipment, in this bergantín was obviously not going, Pizarro, who captained the other.

They arrived triumphantly in Cartagena where they met with Enciso, who was surprised by the story they told him, suspecting that what had really happened was that they had killed Ojeda and that they were fleeing from his justice and so he was about to arrest them. But he finally believed his arguments. With Enciso came Vasco Núñez de Balboa, who fled Santo Domingo because of the debts he owed him and stowed away in the expedition. When Enciso discovered him, very intelligently, did not want to apply the usual punishment for stowaway: to be thrown overboard or abandoned on the first island they found, because he knew that Balboa had already visited those regions next to Bastidas and Juan de la Cosa and could be very useful to him.

They arrived in San Sebastian and Enciso and Balboa when they saw the place  they proposed to change to the other shore of the Gulf of Urabá, where according to Balboa there was a somewhat more peaceful Indian city with plenty of food. But when they arrived, they found the Indians waiting for them armed with their bows and axes. The battle was unequal, with the arches and axes succumbing to sharp Castilian swords. In this place they established the town of Santa Marí­a de la Antigua del Darién, the first important town founded by the Spaniards in Tierra Firme, but not from the American continent since this was the Isabela on the Hispaniola island 16 years earlier. But it didn’t last long and was abandoned because of its poor location and the continuous problems with its neighbours.