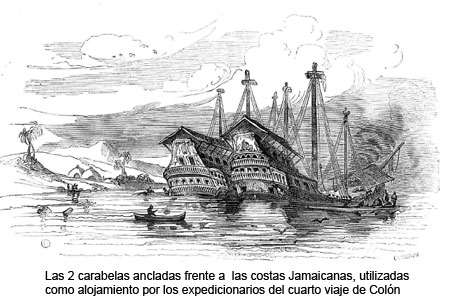 We continue with Christopher Columbus shipwrecked and forgotten along with his men in Jamaica during his Fourth trip to the New World. They had to contact someone as soon as possible to get out of there. They decided to send someone after the Hispaniola island. In mid-July 1503, he departed Diego Méndez with Bartolomé Fiesco and six Indians in a reinforced canoe for navigation to ask for help. They did not know how long it would take, nor the navigation conditions that would be found, since during the entire expedition the weather and sea had been the worst enemies that could be found. The distance to be covered was nothing less than 200 km by sea and then another 400 km by land to Santo Domingo. Quite a feat if they did.

Before leaving, the admiral had sent Diego Méndez inside the island to create a complex food supply system by exchanging European products with the island’s chieftains (Huarco, Ameiro). He reached an agreement with three of these native chiefs who would supply food in exchange for these products, leaving a Spaniard in charge of coordinating these deliveries in each tribe. The system worked perfectly well until the natives got tired of it and refused to continue collaborating with the foreigners. This further complicated the situation.

Méndez’s expedition departed. When they had just moved away from the coast, they were captured by Indians who had been carelessly escaped from the coast. They returned to the Spanish ships with the idea of going out again but this time with the protection of Bartholomew Columbus and a few men. They finally managed to get away from the Jamaican coasts bound for Santo Domingo. Once there, they had to continue their journey to Spain with letters that the admiral had given him.

The rest of the men stayed on the Jamaican island with the hope that Méndez’s trip would succeed and thus be rescued. Time went by and with it came the illnesses caused by the wear and tear that had already come with the trip, the poor living conditions in two dilapidated ships anchored a few meters from the coast and the poor living conditions of the native food based on vegetables to which they had not yet become accustomed. With the illness came the hopelessness and irritation of the expeditionaries.

Francisco and Diego de Porras, the first captain of one of the caravels and the second scribe and general accountant of the squad, were not satisfied with Columbus’ passivity. It was long enough that the canoe had probably arrived in Santo Domingo and sent a ship to his rescue, but no one was arriving there. A group of Spaniards began to worry seriously. They thought the admiral was not doing anything to leave the island, they just kept waiting for them to come to their rescue, when they were able to catch a few canoes, prepare them for the crossing and get to Santo Domingo on their own. Why so passivity?

On January 2th, 1504 Francisco de Porras stood before the Admiral and told him of his plans to immediately take ten canoes and leave in search of the Hispaniola island. Columbus asked them to remain calm and wait, but they ignored him. About fifty men embarked and set sail for the east to the cry of “To Castile! To Castile!”. But they soon became disenchanted; the waves and the overload of the canoes brought them back to earth. They tried again after a few days to see that the sea was calmer but still impossible because of the contrary winds. The expedition had failed. They finally returned to land and formed their own camp away from Columbus.

The matter became more complicated when the Indians, as we discussed earlier, began not to supply provisions to the shipwrecks with the same efficiency; the bells, mirrors and other objects that used to drive them crazy no longer liked them so much that they valued them less; seeing the Spaniards who were hungrier and more eager for their products provoked their cost increase and also realized that if they did not supply them with enough food, they would not be able to pay the price. 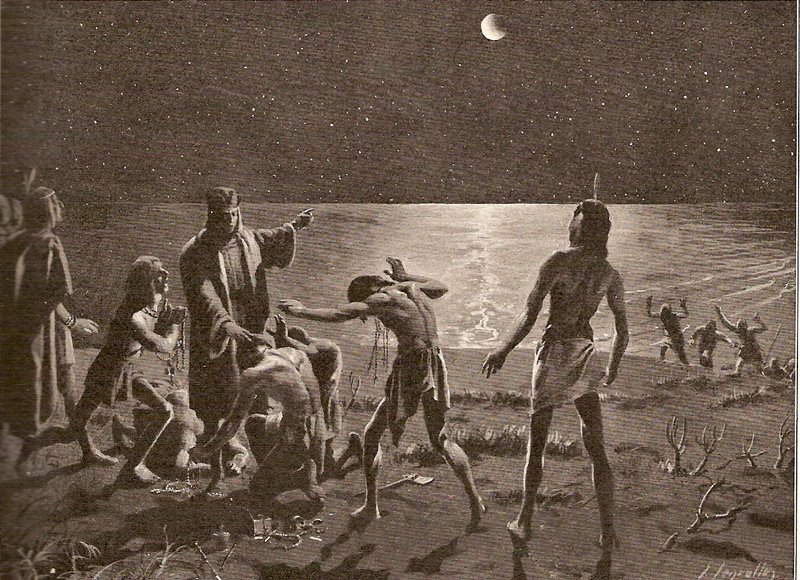 Columbus devised a ploy to get the Indians back to their previous more collaborative state: he threatened them that their God would deprive them of the lunar light one day at an exact time. And this he told them because thanks to the books of astronomy that he had been carrying with him, he knew for sure that in three days a lunar eclipse would take place in the first half of the night. He summoned the local chieftains at the hour of the show and told them that their God was angry with them because they did not collaborate and that in a sign of their anger he would take away their lunar light for a few minutes, and that this would be the first punishment of others who were much harsher and more mortal. When the announced eclipse took place, the natives were terrified and promised to give them everything they asked for in order to placate the wrath of their God.

More than eight months had passed since the departure of Méndez and there had been no news from Hispaniola. Desperation began to spread again among the crewmen who had not adhered to the Porras rebellion. Then one afternoon a caravel appeared in the firmament, generating great expectation. But this ship didn’t come to rescue them, it was too small to fit everyone in. He only left a letter from the Governor of Indies Frey Nicolás de Ovando to the admiral and a few groceries and took Columbus’s answer asking for help.

However, this fact encouraged the Spaniards. It meant that Méndez had arrived to Santo Domingo and that as soon as he could assemble a couple of ships he would pick them up. Referring to the trip of this courageous sailor along with Bartolomé Fiesco and six Indians, I would say that they managed to reach the Navaza island after a very hard paddling trip in which they ran out of water and food. They were saved by this small islet where they were able to collect water, eat some seafood and rest for a couple of days before leaving for the cabo Tiburón where they arrived in a short time.

Once on Méndez Island, he didn’t go to Santo Domingo, but had to go to look for Governor Ovando in Jaragua, where he was carrying out military campaigns. Once he found him, he asked for a couple of ships to go and look for his comrades in Jamaica, but the commander with the excuse that there were no ships available at that time, was delaying the delivery of these ships, something that could be true. He’d have to wait for them to arrive from Spain. The wait was extended to almost seven months when he was finally able to acquire a caravel in the admiral’s name with sufficient capacity for the rescue and another one given by Ovando. 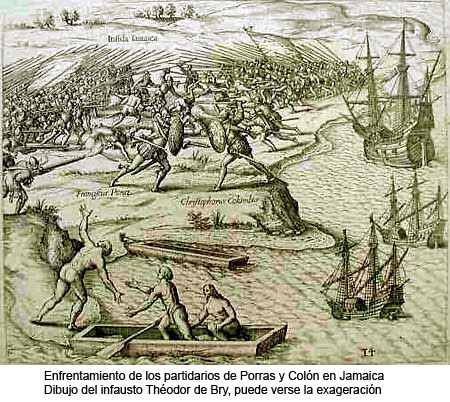 While all this was taking place in Hispaniola, in Jamaica violence exploded between Bartholomew Columbus and the Porras brothers. After the arrival of the caravel carrying a letter from Ovando Colón, he tried to negotiate with the rebels so that they could return under his discipline, promising them forgiveness and an early departure from the island, but they were suspicious of the admiral and his promises, so they did not agree to submit. Faced with this new refusal to submit to his authority, Columbus ordered his brother to return to the rebels and attack them so that they could put down their attitude. There he was the one ahead and the confrontation took place, the first battle of more or less entity between Spaniards in the New World and before the amazed gaze of the Indians. Francisco de Porras was captured by Columbus, causing the disintegration and flight of the rebel group, whose members ended up surrendering and asking for the admiral’s forgiveness.

At last, the ships with the naufrages arrived in Santo Domingo on August 13th, 1504 and were welcomed with great joy by the locals. On September 12th, 1504, the admiral would see for the last time the coast of the Hispaniola island, bound for Castile, where he would arrive on November 7th after a complicated and stormy trip.