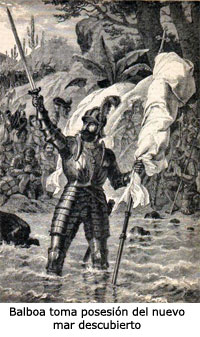 We are in the month of September 1513. Vasco Núñez de Balboa and 190 Spaniards depart from Darién direction to Careta, Caribbean region whose chieftain was an ally of the Spaniards and where a thousand more natives joined. From here, they entered the thick and green jungle in search of that sea that the Indians had told him so much about and that, according to his instructions, following further south they would take him to the Birú (Peru), lands full of gold and riches.

Along the way they stumbled across different tribes that received foreigners in very different ways. Some well, welcoming them and feeding them and offering them the rest of their homes, and others with poisoned spears and arrows. In the latter case, if the Spaniards win, they would usually force the chieftain to convert to Christianity and thus be their ally, but if they lost, they would have to flee as quickly as possible. Let us bear in mind that with the Spanish expeditionaries traveled with indigenous allies who knew the different forms of warfare very well and were much more useful in a jungle territory so hostile to Europeans.

There he was told that by climbing one of his mountains he could see the great South Sea. Balboa went up personally to verify this information and to be the first one to be able to contemplate it. Before him came a vast blue sea that could not be other than the one that would take them to rich lands of gold and pearls.

But they were not yet on the coast, they had only been able to see it in the distance. They had to descend again and travel through a valley that would take them there. He sent the captain Alonso Martí­n to look for a good path to follow through those inhospitable lands returning two days later with the mission accomplished.

Following the instructions of Captain Martí­n Balboa and a group of 26 chosen men arrived on the coast and took possession of the new sea in the name of the reyes de Castilla.

Balboa had achieved the dream of Columbus of finding the passage to Asia, although he had to access it through the land when the admiral thought it could be done by sea. This milestone was achieved a few years later, when he was able to double the Tierra de Fuego to the South America.

With this important discovery, which some consider the second most important event only below the discovery of America in 1492, the new route towards the conquest of Peru, one of the landmarks of the Spanish conquest of America, was left open.

They continued their canoe expedition to an island he called the island Isla Rica and Pearls archipelago to the group of small islands around them.

They returned to the Darien but on a different route crossing the regions of Teoca, Pacra, Bugue Bugue, Bononaima and Chiorizo looking for new riches which caused numerous confrontations with the natives of these lands, although many allied with them. They arrived in Darien on January 19th, 1514. Balboa immediately sent the captain Pedro de Arbolancha to Castile to take news of his discoveries and the fifth royal belonging to the Castilian king of gold achieved in this long and profitable expedition.