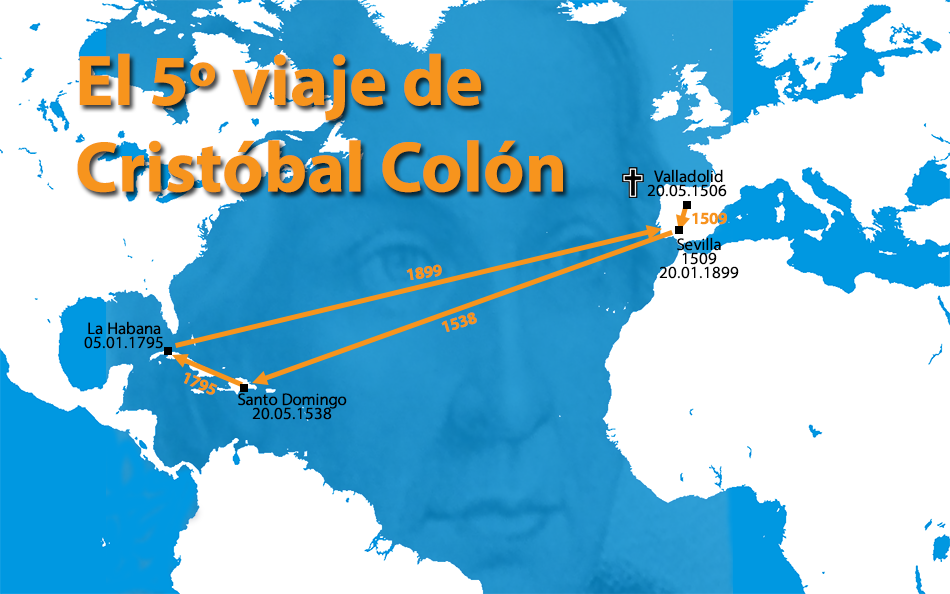 Christopher Columbus made up to four trips before 1506 between Castile and the newly discovered territories. The first of these trips was the one known by all of Discovery in which they departed from Palos de La Frontera on August 3th, 1492 with 3 ships and 100 crew members returning to Castile in March 1493. The second journey departed from Cádiz on September 25th, 1493 with 17 ships and 1500 people; this was the first properly colonizing journey and with this expedition the first urban settlement was founded in New World: The Isabela, in the north of the Hispaniola island (todays Dominican Republic). For several years the Admiral was in the New World exploring and conquering new lands for Castilla and León and did not return to Castile until June 1496 to defend himself from the accusations of malgovernment and abuses launched against him by many Spanish settlers.

The third trip departed from Sanlúcar de Barrameda on May 30th, 1498. On this voyage, for the first time, a European set foot on the American continent, specifically to the northeast of today’s Venezuela, and after exploring numerous Caribbean islands, he returned to Castile handcuffed together with his brothers Diego and Bartholomew, arriving in Cadiz on November 25th, 1500. Once liberated by the Catholic Kings prepared his Fourth Journey leaving Seville on April 3th, 1502 and explored the Central American coast looking for the pass to South Sea but failed to do so, he finally shipwrecked in Jamaica where had to be rescued by the Santo Domingo governor. He was embarked on a caravel and arrived in Sanlúcar de Barrameda on November 7th,1504.

From Cádiz he moved to Seville, from there to Segovia and from here to Valladolid pursuing the Castilian courts and have a meeting with King Fernando el Católico to comment on the result of his last expeditions and to negotiate the privileges that had been reduced ostensibly by the King. This would be the beginning of his fifth and last trip, a journey of more than 300 years that will take him to the places where he lived much of his adventures and misfortunes. When he arrived in Valladolid, he began to feel ill and suffered a heart attack caused by Reiter syndrome or reactive arthritis, the symptoms of which can be seen in his writings during the last three years before his death.

That fateful 20th of May 1506 his body was deposited in the now-disappeared San Francisco convent in Valladolid. This would be the departure of his last journey. By order of his son Diego Colón, his body was moved in 1509 from Valladolid to Seville, where he was buried in the Santa Ana chapel of the Monastery of Santa María de las Cuevas. This Sevillian monastery was of great importance in Columbus’ life. In it he got support and accommodation while preparing his proposal to the Catholical kings and used his magnificent library to document his projects. Columbus’ body remained in this chapel until 1542, when his daughter-in-law María de Toledo, wife of his son Diego Colón, according to the testamentary wishes of her husband, requested permission from the rey Carlos I to exhume the remains of both Columbus and transfer them to the city of Santo Domingo on the Hispaniola island.

The Viceroy Maria de Toledo was personally in charge of transporting and guarding the ballot boxes where the remains of her husband and father-in-law went. They embarked in Sanlúcar de Barrameda in the conquering expedition of Hernando de Soto made up of 10 ships and almost a thousand men. The viceroy was accompanied by a Carthusian monk named Don Diego Sarmiento, bishop of Cuba. The fleet departed on April 6th, 1538 and arrived in Santo Domingo on May 20th. The fortress’s commander was received by the chronicler Gonzalo Fernández de Oviedo. Finally, the Admiral’s remains were reinhumed in the Major Altar of the Cathedral of Santo Domingo already entered the year 1541.

Since then the remains rested in peace and without serious upheavals except for a great earthquake that shook Santo Domingo on May 19th,1683 that was about to tear down the cathedral and almost the entire city.

But in 1795 the signing of the Treaty of Basel with France handed over the eastern part of the Hispaniola island to France, falling into his hands the whole of it. The value and significance of these remains led Archbishop Fernando Portillo y Torres and Spanish Admiral don Gabriel de Aristizábal to try to protect them from foreign hands and they decided, ahead of the royal order, to move the navigator’s remains to Cuba. They went to the cathedral presbytery and extracted some urns of lead with human remains and embarked them in the Bergantine El Descubridor which took them to the Ocoa Bay in the south of the island where they were deposited in the ship San Lorenzo which departed on December 21th,1795 in the direction of the port of La Havana in Cuba where arrived in 5th January. The remains were solemnly deposited in the Havana Cathedral on January 19th and remained there until the end of the 19th century, when the Spanish-American war in Cuba ended with the defeat of Spain and its sovereignty was torn from the beloved Cuban island.

As they did in Santo Domingo, and to prevent the remains of Columbus from falling into unwanted hands, the president of the government, Mateo Sagasta, ordered their transfer to Spain. On 26th September the box was removed from the niche of the cathedral and on 13th December it was loaded onto the cruise ship Conde de Venadito. On January 20th, 1899, the town of Seville greeted with joy the ship Giralda, which brought back, after 355 years of absence, the offal of the Discoveryer, which was buried, with great pomp, in a provisional tomb in the cathedral until its transfer, in 1902, to the definitive mausoleum where today rest designed by Arturo Mélida.

As an additional note, and so that our Dominican friends don’t get angry, it can be said that the facts narrated here are those officially accepted by most historians and it is certain that Columbus’ remains are in Seville. Well, I think that with this transfer of urns, boxes, plates, dust, bones and mess with the distribution of the remains of the Columbus family in various churches, monasteries and cathedrals it is very possible, or almost certain, that the remains of Mr. Columbus have been dispersed and are not in one place but in several. In Dominican Republic continue to ensure that the remains contained in the Faro a Colón are those of the navigator and I think it is very good, surely they will be, but the remains of Seville as well. Better to look for meeting points and bridges that unite us and not fight for things like that.