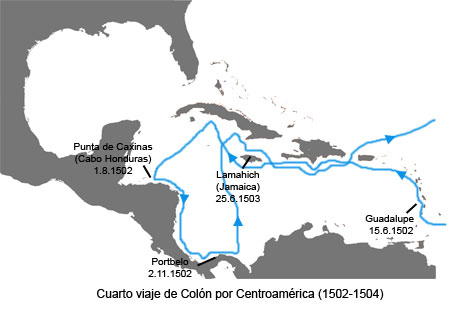 After stay in Spain of almost fifteen months they had everything ready for the new and last voyage of Columbus to the New World. This expedition consisted of four caravels and one hundred and forty crew members, including his son Hernando, his brother Bartolomé and his nephew Andrea.

They departed Cádiz on May 9th 1502 as always towards the Canary Islands, however, they had to make a disuarrying visit to the Portuguese city of Arcila, located in the north of Morocco, near Tangier. But when the siege arrived, it had already been lifted.

After a quiet crossing they arrived on the island of Martinica on June 15th where they get water, collected firewood and washed their clothes. They continued between Small Antilles along the south coast of the San Juan Island. The admiral’s intention was to explore again the shores of Paria and continue to Veragua where he thought was the passage to the South Sea but one of his ships began to have problems and chose to make a stop at Santo Domingo to repair or replace it with another one in better condition. But the Catholic Kings, , when they gave him the possibility of organizing this new expedition, told him very clear that under no circumstances could arrive to Hispaniola island in order to avoid possible problems or rebellions against him. Columbus ignored this order and sent one of his captains to request permission from Governor Nicolás de Ovando to enter the port of Santo Domingo, warning him also that a large storm was approaching and that he would also need the harbor shelter for his fleet. But the governor refused permission, so they had to continue sailing to the port of Azúa where they took refuge from the storm.

They continued their journey to Jamaica and Cuba and then set sail for Central America, whose coast they discovered on August 1th, 1502 at the height of Caxinas (Cape Honduras). The first contact between Maya and Spaniards took place here; they were told that there were many gold mines further south, specifically in the Veragua area. They could see that the Indians of this part were more developed than the Antilleans and this was good news. On August 14th, the first Catholic Mass was celebrated in the continent, officiated by the friar Fray Alejandro.

They travelled along the Caribbean coast of today’s Honduras, Nicaragua, Costa Rica and Panama. On February 24th, 1503, they arrived at the Belem river where they found rich gold deposits and founded an effi­mere establishment: Santa María de Belén, which had to be quickly abandoned due to the hostility of the Indians and the harmful climate of the area. There they had to abandon one of their ships, the Vizcaí­na carabel, due to the deterioration of the joke and the damage suffered during the storms. 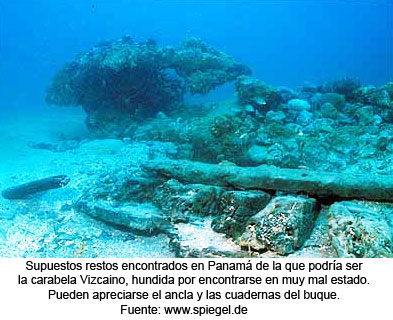 On November 2th, they arrived at a beautiful bay that Columbus called Portobello where they lost another of their ships, for the same reason as the previous one. They continued along the coast with only two caravels to the present cabo Tiburón and there they decided to head north towards the Hispaniola island again because Columbus deduced that they had arrived in the lands that they had already explored Alonso de Ojeda and Juan de la Cosa. After returning to the south coast of Cuba, they headed for Jamaica, where they arrived on June 25th,1503 with the two surviving caravels in such a bad state that they had to leave them stranded on the coast. Instead of landing on land, they used them as a residence; here they felt much more secure in the event of attacks by the natives. 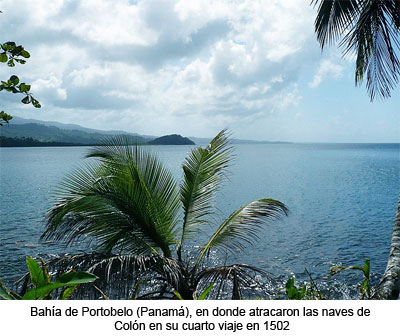 The expedition had run out of ships and was abandoned on the island of Jamaica, but they did not surrender. They sent the sailor Diego Méndez to Santo Domingo for help, who sailed in an improved canoe over very dangerous waters, arriving in Santo Domingo several weeks later and thus saving the expeditionaries from certain death.

While Mendez returned with the help, they remained in Jamaica for more than a year in which there were very serious events and rebels.