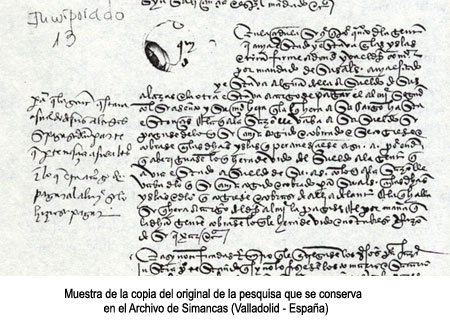 Despite the fact that the facts attributed to the Columbus were sufficient in themselves for his trial, Bobadilla continued with the investigations to clarify other matters of great concern to the Catholic Kings. To this end, some twenty witnesses from different parts of the Hispaniola island were chosen, both friends and enemies of the accused.

Three questions would be asked of each of them:
Had Columbus tried to mobilize Indians and Spaniards against the new governor?
The answer was unanimous of all the witnesses: yes, he had tried to join an army to march on Santo Domingo and force Bobadilla to return to Castile.  So he disobeyed the royal orders and tried to rebel against them, but he did not achieve his goal because very few people joined him as it was demonstrated when he arrived to the city with only a score of followers. Something similar had already happened to him when he ordered all the residents of Santo Domingo to appear in the Plaza de Armas to march against the rebel Roldán, his failure led him to negotiate with the Mayor.

Did Columbus impede the baptism of Indians?
Despite the admiral’s religiousness and his constant observance of religious duties, both his own and those of others, one of the most serious accusations against him was his refusal to baptize numerous indigenous or to put all possible obstacles in the way of making such baptisms, thus seriously contravening one of the main reasons for the conquest and colonization: the expansion of Christianity in unknown lands.
Although it may seem incredible, it was the admiral who decided who was to be baptized and who was not. This provoked many conflicts with the ecclesiastics there. Many of the witnesses testified that they asked Columbus for permission to Christianize the natives with whom they lived and to marry them in Christian marriage, but the admiral did not grant it.

And what was the reason for this reluctance to Christianize natives? Some people declare that, in their Christian zeal, they wanted to convert only those Indians who already knew the most important rites and prayers of Christianity, that is to say, they should first pass a period of learning to later baptize them. But other witnesses said that this was only an excuse to enslave as many indigenous people as possible, because if they were Christians they could no longer be sold as slaves and in view of the lack of gold and few riches found, the slave trade seemed to be the only way to make the investments in the New World profitable. Although in the end the Catholic Kings banned this trade as inhumane and very un-Christian, they even ordered that all slaves who arrived in Spain from America be returned to their lands. The first twenty-five slaves returned to the Spaniard arrived in Bobadilla’s caravels.

How did Columbus administer justice in your territories?
Among the accusations related to his way of delivering justice in La Hispaniola, the most important were:

– Condemning and executing prisoners without any investigation or trial. For example, the execution of Hernando de Guevara, throwing him a wall below in the Conception Fortress, which he did not even allow to finish his confession.

– He beat and humiliated Inés de Malaver for having lied when she declared herself pregnant in order to be able to get more food, the slave Luquitas was hanged for stealing a wheat bush, etc.

– To mistreat the workers by denying them food even in situations of illness, when it was known to all that in the royal alhondiga and in the house of Columbus there was a great deal of food that in many cases even had to be thrown away because they rot.

Thanks to these documents we have been able to know a part of Columbus that was not very well known, hidden by the majority of chroniclers and historians who have always extolled the figure and personality of Columbus as if he were a deity, when he was nothing more than a man of his time with immense deficiencies from the human point of view but possessed by a character and a force thanks to which he was able to complete incredible adventures and great feats.