We leave Christopher Columbus with the concern of the arrival of Ojeda to the west coast of la Española. He sent his warden Francisco de Roldán to ask him for explanations and to invite him to take his feet off the island. What he didn’t know is that other expeditions were already underway and others in preparation, they were the ones called Andalusian Journeys that put end to the exclusivity of Columbus’s New World trip.

But the Admiral had other problems on the island. Other well-known personalities  were strongly opposed to him and to his way of governing. For example, Hernando de Guevara and Adrián de Mújica. The first rebelled against Roldán for a skirt affair with the beautiful daughter of Anacaona, of which, according to Bartolomé de las Casas were both in love, and the second rose next to Pedro de Riquelme to protect Guevara, of whom he was a cousin. All these rebels were captured and sentenced to death and taken to the Santo Domingo’s fortress (the one on the east bank of the river, not the current fortress Ozama, built later), except Hernando de Guevara who was executed in the same Concepción, where was Columbus. The prisoner was executed in a hurry and thrown from the fort’s walls. 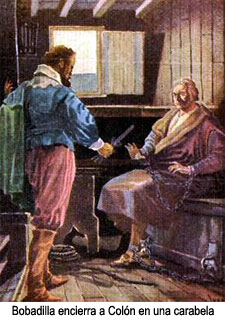 Meanwhile, during the previous months, bad news kept coming to Castile from those returning from their New World adventure. Complaints of mistreatment, unworthy work, breach of commitments, brutality, injustice and nepotism forced the Catholic Monarchs to take severe measures. They had already sent a first investigating judge, D. Juan de Aguado, who returned with negative reports, but they still continued trusting in Christopher Columbus as viceroy and governor of Hispaniola, but the news they received from the rebellion of Francisco de Roldan filled the glass of their patience and decided to send someone with a much more serious mandate and important orders to fulfill.

Early on August 23th, 1500, two caravels arrived at the estuary of Ozama river in Santo Domingo. Diego Colón, admiral’s brother, sent a boat to identify the new arrivals. The surprise was great, the newcomer was the commendator Don Francisco de Bobabilla, who arrived in Hispaniola to “act against those who were walking uphill“. As soon as he entered the river, he could see a gallows hanging from each side of the mouth of the river with two Spaniards hanging from it. A terrible first contact with the New World.

The judge did not disembark until the next day when he went directly to the Mass that was offered every day and attended by many more people than usual to find out what was going on. At the end of the celebration a notary public read  a letter in which the Catholic Kings ordered him to investigate the rebels who had risen against Columbus. There he met Diego Columbus, who had not had the courtesy to receive him at the port upon his arrival, and he asked him to hand over the prisoners imprisoned in the fortress, as well as all the documentation of the proceedings against them, as well as the ones that Bartolomé Columbus had been taken prisoner in a hole in the ground in Jaragua. But the Columbus brother argued that he had no power to obey that order by refusing to do so and calling for its fulfillment upon the Admiral’s arrival.

The following day the same process was repeated, the commendator went directly to Mass and at the end another real provision was read, in which the notary public communicated to those present the appointment by the Catholic Monarchs of Bobadilla as governor of the Indies with full powers, and ordered them to pay the outstanding salaries. He then ordered Diego Columbus to surrender the prisoners but again refused, so he chose to attack the fortress directly, taking it without major problems.

As the admiral was not in Santo Domingo, he had to be told to meet the new governor. It took several days, in which Columbus tried to get support among his followers and the Indians to present himself with a good entourage in the city and thus force Bobadilla to return to Castile, which was a clear contempt of the royal orders, but failed and could only be presented in Santo Domingo with a score of followers. The meeting took place on September 15th,1500.

Columbus had to accept the royal mandates and was questioned by Bobadilla on various matters of the utmost urgency:

–The reason why Hernando de Guevara, Pedro de Riquelme and the rest of the men that Bartholomew Columbus had locked in a well in Jaragua and where were the processes to analyze: Columbus took a long time saying that he did not have those processes because they were simple cases of punishment and that if he wanted to free the inmates Regarding the trials of those already executed, he said that he had brought them personally to Castile, but there was no news of them. The kings had demanded to the admiral that the proceedings against Spaniards were always sent to Castile to be tried there, but the admiral disregarded this demand with total malice.

–How much was the gold due to the kings of the ransoms redeemed? He didn’t know the exact amount owed them because he had not yet settled the payments to the royal employees.

-Why hadn’t the royal employees been paid? : He had not paid anyone anything, he had kept all the gold collected.

At the beginning of October 1500 the three brothers Columbus, Christopher, Bartholomew and Diego were embarked on the Gorda caravel, in which Bobadilla had arrived just a few weeks earlier, and taken to Castile for trial.

Bobadilla’s next task would be open an investigation to find out the truth or falsehood of the main accusations against the Columbus government and to put order in the island’s administrative affairs. It was an arduous task and one that would require a great deal of poise and perseverance, although it is true that I was going to count on the full collaboration of the Spaniards living there, who welcomed the changes with great joy and hope.