As I mentioned in the previous entry, Roldán’s followers waited in the Xaragua for the caravels promised by the admiral to return to Castile, but they did not arrive until April 1499. This delay was due to a series of storms that they encountered on their way from Santo Domingo, which gave them time to rethink many things and finally decided to stay on the island and not return to Spain. Moreover, the poor condition of the ships did not invite them to do so, making them suspect that Columbus wanted to sink them in the middle of the ocean.

A meeting was arranged with Columbus to reach a new agreement. They were found in Azúa, a village halfway between Xaragua and Santo Domingo. The admiral sent several letters to Spain in which he told everything that was going on with Roland and his struggle to pacify the island, but he only received a cold response from Bishop Fonseca in which he was told to send a judge to analyze the situation and take appropriate action. Columbus’s credit was back on the ground in Spain, they no longer trusted their testimonies and had to turn to others to subjectively know what was going on, as had already been done with Juan de Aguado. 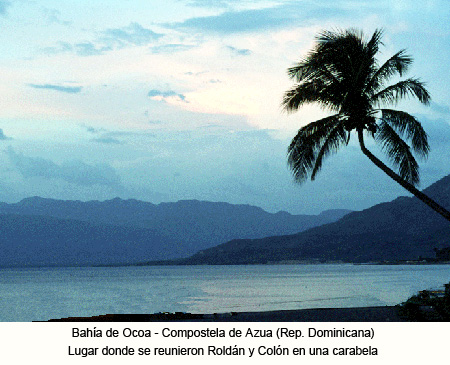 The meeting between Roldán and Columbus took place in the bay of Ocoa on board a caravel of the admiral off the beautiful coasts of southern Spain, and the following agreement was reached:
– Free choice of the rebels to return to Spain when they wanted, but always in normal fleets, not on ships prepared only for that task (even if something should happen to them).
– The granting of farmland to the supporters of Roldán instead of the royal salary, which never arrived.
– Withdrawal of all charges against Roldán .
– Restitution of Roldán as mayor.
– In the event of non-compliance with these precepts, Columbus would be subject to the justice of Roldán.
In other words, the rebels wanted to create a better way of life, in keeping with what they had promised, to cultivate their own land in order to generate wealth and develop the area.
With the recovery of the post of Mayor of Roldán, the satisfaction of the needs of his followers and the return to Spain of some of them put an end to this rebellion that did nothing but impart some justice to the bad government and the excesses of the Columbus over the deceived settlers.

– First part of the Roland Rebellion.

– Second part of the Roland Rebellion.