After the reign of Henry IV, in which there were no great advances in the so-called Reconquest, the Catholic Monarchs re-launched the project of defeating the Muslims and religiously unifying the Iberian peninsula.

After approximately eight hundred years of hostilities and periods of peace, the Nazari­es ruled in the south-southeastern part of the peninsula, then known as the kingdom of Granada, which today would be the provinces of Almeria, Granada, Malaga and some parts of Jaén and Cadiz. This area is one of the steepest in Europe thanks to its mountains and mountain ranges, forming an authentic natural fortress very difficult to take militarily with the existing means at that time. 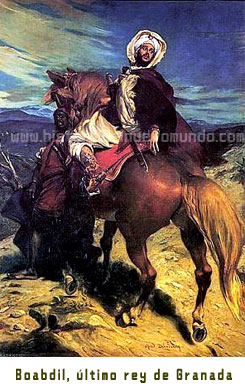 Hostilities resumed in 1481 when Sultan Abulhasan unexpectedly attacked the border fortress of Zahara and cut all its inhabitants to pieces. Its aim was to regain popular support by means of a military victory against the Christians. In fact, he managed to regain his prestige among his fellow countrymen, but he also managed to soliviate the Christian knights of the area, who as revenge launched a counterattack by taking the Granada city of Alhama, an enclave very close to the capital, causing terror and terror among its citizens. Finally, these events led to the seizure of power by Boabdil, son of the sultan and Abulhasan’s flight to Malaga, where he was received by his brother, El Zagal (courageous).

Later there was a Christian attempt to attack Malaga but El Zagal discovered the plan and endorsed a hard defeat to the Christians in the ravine of the Ajarquí­a. This victory raised and provoked the envy of Boabdil, who in order to surpass him in that prestige prepared a new coup by climbing up the Genil river and attacking the city of Lucena by surprise. But the shot backfired because not only did not succeed in defeating the fierce Christian resistance but he was taken prisoner by the Castilian army and transferred to Cordoba in the presence of King Ferdinand. This would be the beginning of skillful diplomacy on the part of the king who would report great victories without the use of weapons.

On August 28,1483 Boabdil was released in exchange for being an ally and vassal of Castile, paying tribute and freeing numerous Christian captives in Granada. Fernando knew that if he finished Boabdil, he would leave the Sultan and his brother El Zagal as the only leader, achieving the unity of the kingdom of Granada, thus liberating him and dividing him into two irreconcilable factions. We know, the eternal currency of divide and conquer.

Having said that, when Boabdil returned to Granada, the two Muslim factions fought each other very hard, in which neither of them won the victory, ending with a captivating finale: Boabdil ruled from the Albaicí­n in Granada and Abulhasán from the Alhambra.

Until now, the Granada war had been a continuous exchange of surprise operations, blows and night attacks. But after Boabdil’s capture, the Catholic Monarchs turned it into a perfectly planned war, with a planned evolution and the use of modern military tactics and techniques and the use of diplomacy as a weapon.

On the next page continues with the rest of the Granada war.