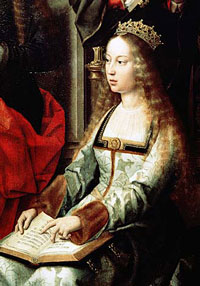 Most Relevant Facts:
– 18 September 1468 is proclaimed Princess of Asturias.
– 19 October 1469 married Fernando de Aragón, becoming queen consort of Sicily and Aragon.
– 13 December 1474, after defeating her niece Juana in the war of the Castilian Succession, she proclaimed herself Queen of Castile in Segovia.
– In 1480 he established the Holy Inquisition in all its territories.
– In 1492 conquers the kingdom of Granada, unifying all the peninsular kingdoms except Portugal and Navarre under his command.
– In the same year, support Christopher Columbus in his plans to reach the Indies through the West.

Other interesting data:
– A woman of great character and deep religiousness, she lived in a sober and austere way, fleeing from the luxuries that her position guaranteed her.
– He drove Jews off the peninsula and later forced Muslims to convert to Catholicism if they wanted to stay in Spain.
– She was a great defender of the American Indians, qualifying them as subjects of the crown and as such assigning them the same rights as the others.

A biographical video about Isabel I of Castile: