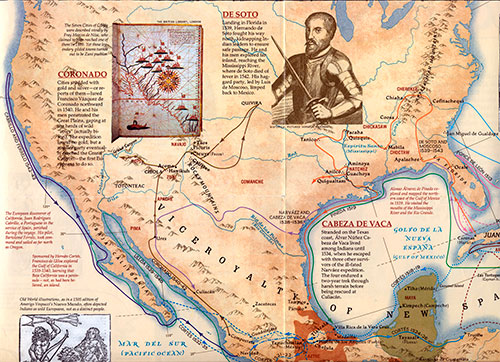 There is very little literature on such a magnificent event as the Spanish conquest and colonization of North America. And much less about the experience and work of a few Spaniards who, like many others, in their search for new opportunities and a better life, ventured further north to Cuba and New Spain in small and large expeditions with almost no data, no reliable accounts of what they were going to find along the way.

Spain explored and conquered vast territories ranging from North Carolina on the East Coast American to Alaska on the northwest tip of the subcontinent: California, Arizona, New Mexico, Texas, Alabama.  These explorations, conquests, colonizations and defense of these extensions had to be carried out with very few resources and in a hostile and very difficult environment. All these regions inhabited by natives in many cases very violent were later part of the virreinate of New Spain.

These expeditions that made possible their journey, study and colonization were carried out by some hard and brave men who had to face very dangerous native tribes (navajos, apaches, seminoles, peoples, sioux, comanches, etc.) or ally themselves with them. Without forgetting the religious sacrifices which, in many cases forgotten by the civil and military forces, carried out their evangelizing work alone in front of tribes that often welcomed them well and with hospitality, but on many other occasions they suffered terrible torture and were vilely murdered. They had to keep isolated forts in hard-to-defend areas with very few men and weapons. A real feat that is unparalleled in history, as it is in almost everything that happened in the New World during those years.

But the feat was not only their exploration, conquest and colonization, but to keep these vast territories under Spanish sovereignty and defend them against native and European incursions.

There is a lot of material of all kinds on conquest of North America about everything related to the Anglo-Saxon, Dutch and French conquest. Later came the conquest of the west and the occupation of the west coast from the east coast, spurred by the development of the railway and the discovery of gold in the Californian rivers. But long before these settlers arrived and formed the present day Canada and the United Statesthe Spaniards had explored, traveled and mapped these immense and inhospitable lands, laying the groundwork for deeper and safer later colonization. It can be said that Spain with its exploratory action “smoothed” the terrain so that others could later take advantage of.

With the term “North America” I want to refer to the current territory of the United States and the east coast of Canada, which is where the main expeditionary events occurred. And many will say that what happens with Mexico, which is also an American nation. It is not included in these articles, since its conquest was dealt with in this blog in depth because of its greater political and historical importance. It is not to marginalize her from her fellow Americans, but because she is more important and with greater depth, she has already had her own place.

After Christopher Columbus Discovery of America in 1492, the adversaries of Castile tried to find their way to Asia in the north of the lands discovered by the Castilians. The first attempts to find that northern route came from the English and Portuguese crowns. The first exploration that came across North America organized by a European nation was that of the Genoese Juan Caboto in 1496. The English crown commissioned Caboto to search for a new route to Asia that was shorter than that discovered by Columbus. This sailor previously sought funding in the Spanish and Portuguese crowns but was unsuccessful and had no choice but to turn to King Enrique VII of England who did pay attention to him and agreed to finance his adventure.

After crossing crossing the North Atlantic Ocean from Bristol, it is estimated that he was able to reach the current cabo Bonavista on the northeastern coast of the island of Newfoundland. Caboto believed, like Columbus, that he had arrived in Asia, specifically at Cipango (Japan). And so he returned convinced to England where he was awarded an award and was granted funding for a new expedition, this time larger, with more ships, more men and with the intention of establishing a colony on the coasts explored. They departed again from Bristol in 1498 and were never heard of again, the ocean swallowed them.

The following expeditions were organized and financed by the Portuguese crown, but they did not put much effort into them either. The most noteworthy are those of the Gaspar and Miguel Corte brothers. The first one in 1500 arrived in Newfoundland and Groenland but disappeared on the return trip. His brother Miguel could not assume the loss of Gaspar and trying not to lose hope of finding him alive he organized an expedition to rescue him and sadly ended up in the same way, disappeared at sea. These disasters can give us an idea of how risky and complicated it was to cross the ocean in those years.

Shortly afterwards the navigator, also Portuguese Joao Fagundes arrived to the shores of the present day Nueva Escocia and founded a small fishing village that only lasted a few years. It was abandoned and thus wiped out any vestiges of European civilisation in these American territories.

These first attempts to find a northern route to Asia were forgotten and did not involve any effective conquest or colonization. In the following years the expeditions will be only Castilian and instead of trying to reach the northern zone, they will begin to take place from the south of North America, departing from the conquered lands such as Cuba and the Hispaniola Isle (present-day Santo Domingo) and after the conquest of Mexico most of the expeditions would depart from the viceroyalty of New Spain. The first Spanish navigator to make an attempt in the North American subcontinent was Captain Juan Ponce de León in 1512, although he thought that those lands of Florida were an island and not what later turned out to be.