Never in the history of mankind has a similar event occurred such as the Conquest of America. La conquest of an entire gigantic continent by the drive and action of a few adventurers who delivered to the Hispanic Monarchy one of the largest territories ever under unified sovereignty. An unparalleled fact in history.

At first glance it might seem like a military operation, organized, centralized and starring in large armies and spectacular battles, but except in a couple of cases it did not. The conquest of America was a brief process of no more than 60 years in which, through various actions carried out by a few men, they were able to explore and defeat great empires and small tribes and not only by means of weapons, but also by means of a a skillful and intelligent use of diplomacy and politics and other aspects that set the scales on their side. At the same time that it was conquered, it was colonized by means of an enormous foundation of municipalities, establishing the Castilian laws and creating its own political institutions.

The beginning of the Conquest of America may coincide with the same Discovery done by Christopher Columbus. Although in those years there was no knowledge of the magnitude of the discovered lands. Columbus’s first expeditions can be limited to exploration missions in search of the path to Asia and also to exploring the natural resources of the islands he was visiting. Truly, facts of conquest and colonization could not really be spoken of until the first serious confrontation between natives and Castilians in the batalla de la Vega Real in 1495, which opened the great valle del Cibao in Hispaniola island and its expansion to the south founding the first Hispanic urban centers and centers in America.

Reading the official documents on those early years, the intention of the missions was mainly economic. The Castilian crown needed resources and the possibility of opening new trade routes to the west was the best option in view of the blockade of land routes by the Turks to Asia and by the Portuguese by sea. But soon the religious and crusade spirit prevailed, especially since the Pope Alexander VI gave the discovered lands to the Castilian crown by means of a bull under the condition that the natives of these lands were converted to Catholicism.

Traditionally, the Indian chronists belittled the role of native tribes in the conquest of America, leaving all the glory of victories to the Spaniards. In their struggle against them they were brave and hard warriors, very much contrary to the image that the Indigenistas give of them postulating them as soft and dominated by the hard and evil Spaniards. These indigenistas forget and hide with very bad intentions that many of these native tribes allied themselves with the foreigners to defeat native enemies in their local quarrels. This was very well exploited by almost all the conquistadors. Hernán Cortés without the Tlaxcaltecas or the Chichimecas, little could have been done to defeat the great city of Tenochtitlán Ni Sebastián de Benalcázar he would have succeeded in defeating the Quiteño armies of Rumiñauí and Quizquiz 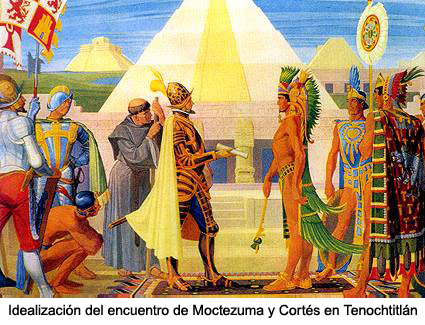 The Spaniards, apart from the alliances, also knew how to take advantage of the rigid protocols of the Native Americans, according to which if the general or the main chief of the army fell all their soldiers fled terrified to be headless the same one. For more inri, in the battles, it was very easy to identify the boss by the clothes and feathers they wore, so in many cases focused their attacks on that ringleader. Fallen this one, end of battle.

Likewise, some native customs gave the Spaniards military advantage, such as among the Mexicas, the fact that they did not want to kill their opponents in the heat of battle, but only hurt them to capture them and take them to the altar of sacrifice.

There are many different factors involved, as well as the variety of circumstances and locations in which they occurred. Nothing has anything to do with, for example, the conquest of Peru with the Río de la Plata conquest, the first was a coup d’ état, a quick action in which the Inca emperor fell, however, the conquest of the American Southern Cone was a slow succession of different expeditions, almost no military, which ended with the creation of several Hispanic settlements in the area and its incorporation as viceroyalty almost without realizing it.

During the conquest of America there was never a great Spanish expeditionary army commanded by generals and with a unified and powerful armament. Everything was done through a legal instrument called capitulation. These were royal concessions granted to a specific captain and by which he obtained the permission to form an expedition, which he had to pay for from his own pocket, and a delimited territory in which he could carry out the conquering and colonizing action. The concession beneficiary had to finance or seek financing for the expedition and the more money it raised, the greater the expedition could be for both men and supplies. The expeditionaries also in most cases contributed what they had to participate, very few were paid. They estimated what the fruit of the adventure would be and depending on what they had contributed, what would be obtained. As we can see from the regular army, he had little good. Normally everyone carried their weapons: their sword and shield, or even, if they were richer, their own horse, something highly valued at the time; losing it was a tragedy.

Military strategy was also important. The Castilians had been fighting against the infidel on the peninsula for several centuries and their natural habitat was the frontier, sleeping in the open air, being prepared at any moment for battle. That forged the rudeness of his character and that fighting spirit that in those centuries also became famous throughout Europe. The new military techniques and the use of armaments, at least striking, played their part, but as I say, was not decisive. The use of gunpowder in humid lands was not easy, the harquebushes took 1-2 minutes to recharge, enough time for an enemy to reach your height and wound you. The shells were used in cold places but in the usual heat of tropical areas and southern deserts it was impractical to use them to protect themselves from arrows and spears.

I also think it is important to point out that when talking about the Conquest of America one tends to think that it was a little Spanish walk through the American lands, and it is not so. These expeditions of conquest suffered constant setbacks, had to overcome a multitude of obstacles and many of them ended in resounding failures, no one gave anything away, so there is no denying the expertise and sacrificial capacity of those men who looking for a better future crossed thousands of miles of violent and unknown seas and walked thousands of miles of jungles, deserts, mountains and terrain infested with enemies waiting

It is not a question of making an apology for facts that were undoubtedly violent and in many cases very hard barbarity occurred, there is no doubt, but neither must we forget in what historical epoch we are and what methods existed. Both the native peoples and the conquistadors made their own.

Nor should we forget that despite all this violence and these barbarities committed, the Castilian crown has always tried to soften these violence and legislate to try to defend the Native Americans. During those hard years, the titles “Las Leyes de Burgos de 1512” (“The Laws of Burgos of 1512”) leyes to soften the clash between two radically different civilizations in all facets of life. The Spanish crown through the church carried out an enormous work of evangelization and education of the natives in Western values and transferred to America all its knowledge and culture fusing with the existing one, not replacing it, as some people claim.

I could go on to talk about many more aspects and details of the conquest of America but I don’t want this article to go too far. In future articles we will go into more details.