We are about to reach a turning point in the process of discovering the American lands. With the arrival of the new 16th century, there will be a major change in the way of discovering and involving new actors.

In September 1499, news reached Santo Domingo that unknown ships had landed in Jaragua. No one knew who they were or why they had arrived from Spain. To find out, the admiral sent Roldán to intercept and interrogate them. The major warden departed with two caravels and when he was half a mile away from the area where the strangers had arrived, he disembarked with 25 soldiers, meeting Alonso de Ojeda and several of his men on land. 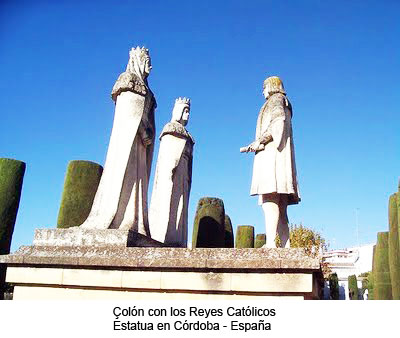 Questioned by his presence there, he told him about his expedition along the South American coast, the problems that arose both in the ships and with the food supply that made him look for friendly land and the capitulation he had to discover new lands signed by the bishop of Fonseca.

Until that moment Christopher Columbus had the exclusivity to organize and undertake expeditions of discovery, but the bad results, the disturbances on the island and the constant disappointments of the previous expeditions led the Catholic Monarchs to allow other individuals to organize these trips, charging them with all the expenses and delivering part of the profits obtained to the crown. They needed to start collecting profits, eight years after the discovery, and the New World was generating nothing but costs and problems. It was also a solution to prevent these problems and losses from spreading to other territories, since it had been perfectly proven that the Columbus were not the best suited to rule new lands, although as sailors their expertise, courage and wisdom could not be discussed.

Already in 1495 Columbus was on the verge of losing this royal privilege. The bad news that came from Hispaniola, the rumors about the disappearance of the admiral since this one in his voyage of exploration of Cuba and Jamaica was long gone and Boyl and Margarit made this rumor arrive in which it was almost for certain that his disappearance was given, and the growing interest that other nations were beginning to show about the new discovered lands made the Catholic Monarchs emit the real provision of April 10,1495 by which any person could The arrival of Antonio Torres’ second supply trip soon ended this rumor and caused the real provision to be ineffective. This was the first warning.

In the case of Ojeda, he could discover and take the lands that did not belong to Portugal and those already discovered by Columbus before 1495, leaving the coasts of northern South America free to be discovered and explored. But this capitulation did not take away Colón’s permission to continue discovering, he only lost his exclusivity, and as we can see, he did not lose the lands already discovered by him in Hispaniola.

This will be the beginning of several expeditions that will allow us to widen the radius of action of the crown of Castile through almost all of America thanks to the private initiative and the courage and desire for wealth of numerous discoverers who will appear on the scene from now on.