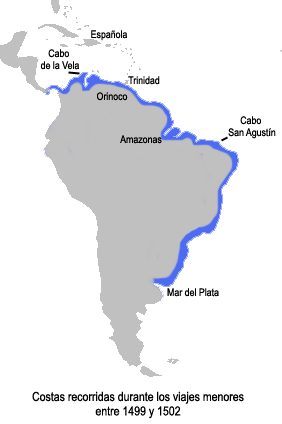 In addition to that first voyage of Alonso de Ojeda and Juan de la Cosa in 1499, several expeditions, called minor or Andalusian journeys, promoted by the crown but financed by private capital whose objective was to recognize and to trade in the coasts travelled by Columbus in his third voyage and look for the possible passage to the other ocean. It can be said that it was a race against Christopher Columbus to discover before him and that in this way he did not obtain so much wealth and power.
These journeys will run from 1499 to 1502 in chronological order:

Expedition of Pedro Alonso Niño with Guerra brothers (Cristóbal and Luis). They departed two weeks after the Ojeda expedition but arrived earlier on the north coast of South America, because it went too far south. They crossed Trinidad, Paria and arrived to the Pearl Islands, next to Margarita, where they carried all the pearls they could and quickly returned to Spain. Instead of returning through Andalusia, they did it for Bayonne, trying to hide part of the merchandise so as not to have to pay the fifth real. They were discovered and imprisoned.

Expedition of Vicente Yañéz Pinzón: They left at the end of 1499 with 4 caravels, after a hard crossing with dangerous storms they arrive on January 26th, 1500 to a promontory that they baptize as Santa Marí­a de la Consolación and that has identified itself with the Brazilian cape San Roque or the tip Mucuripe. Officially it is the first European to step on what would later become the great Brazilian nation, so Vicente Yáñez Pinzón could be said to have been the discoverer of Brazil, although this territory was part of the Portuguese zone defined by the Treaty of Tordesillas, so that the fact of publicizing this fact would have been a conflict with the Portuguese power. Pedro Alvares Cabral would not arrive until three months later, when the colonization of Brazil began. They continued northwest, exploring the mouth of the Amazon, which they called the Rio Grande de Santa Marí­a de la Mar Dulce (the Great River of Santa Maria de la Mar Dulce) because of the long distance that freshwater would go into the ocean. They also passed through the mouth of the Orinoco River, which they called the Dulce River because of something similar to the Amazon. They climbed up to Pariah and near the islands in front of Margarita suffered a storm, causing them to lose two ships and many men. There, curiously, they met Diego de Lepe’s expedition with whom they joined in their navigation through the Little Antilles to San Juan. Once spare parts of the trip returned to Spain crossing the Lucayos in search of spices arriving at Palos de la Frontera at the end of September 1500.

Expedition of Diego de Lepe: this paleño left Palos de la Frontera in January 1500 with two ships. In mid-February 1500 he arrived near Cape San Agustí­n and took possession of these lands for Spain, although Yáñez had already done so. As we mentioned earlier, he met Yáñez’s expedition in the Gulf of Paria and they went together to the island of San Juan, where they recovered food, water and arranged their ships for the return trip. They reached the peninsula in mid-August 1500. 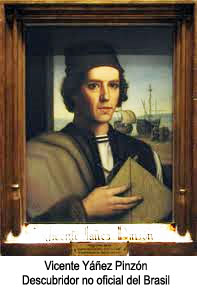 Expedition of Alonso Vélez de Mendoza y Luí­s Guerra: the news that had arrived from Portugal of the arrival to the South American coasts of Cabral led Bishop Fonseca to organize an expedition that validated the discovery of the Portuguese and to compare it with the results of the previous trips made by the Castilians. They departed at the beginning of September 1500 in two caravels. After stopping in the Canary Islands and Cape Verde, they took the same course as Cabral, reaching the Brazilian coasts at the height of Cabo de San Agustí­n, as well as the rest of the expedition. But as autumn was autumn, the Aisean winds carried them southwards very probably almost to the Mar del Plata, proving that thanks to the shape of the American subcontinent, the lands located further south entered the Castilian influence zone through the Treaty of Tordesillas. There were many more lands to discover and conquer. They returned in June 1501.

Expedition of Rodrigo de Bastidas and Juan de la Cosa. The two caravels of Cádiz leave in September 1501. They arrive to the American coasts taking a northerly course, crossing the entire Venezuelan coast to Cape La Vela, where Alonso de Ojeda had already arrived, they continued along the coast of Citurna, landing in Santa Marta and reaching the Gulf of Urabá for the first time. They discovered the Magdalena River, the coast of Cartagena, the gulf of Darien and the isthmus of Panama. After rescuing a large number of pearls, they traveled to Jamaica to fix their ships, attacked by the joke, leaving them almost useless.

As we can see on the map this set of trips was of vital importance for the crown to get an idea of the magnitude of the continent it was exploring at least in stretch of coastline because you could not yet know how far back there was.