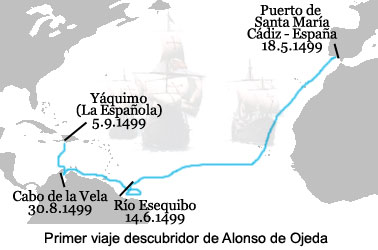 On May 18,1499 the first discovering ships not commanded by Christopher Columbus departed from the Port of Santa Marí­a in Cadiz. This expedition, which marked the end of Columbus’ exclusivity to organize voyages of exploration, was promoted by Rodriguez de Fonseca to verify the veracity of what Columbus announced in his letters to the Catholic Kings narrating the discoveries of his third voyage, also when taking Juan de la Cosa it was intended to make the first map of the coasts of the new lands.

The fleet was made up of the following caravels Capitana and Nueva, the first captained by Alonso de Ojeda and as master Juan de la Cosa, and the second one with Fernando Ladrón de Guevara as captain and Juan López de Sevilla as pilot. Its crew was mostly made up of fishermen and sailors who had already participated in one of the Colombian voyages, so they already had experience in similar voyages.

Ojeda had access to letters and documents sent by Columbus to discover the route and the places where rivers, pearls and other riches had been discovered, although he was not allowed to touch Portuguese lands or those already discovered by the Admiral before 1495, i. e. the territories discovered on his third voyage were perfectly explored.

Alonso de Ojeda and his associates left. The route taken by this expedition, after leaving the African coast of Cape Verde to cross the Atlantic, reached American coasts a little further south than Columbus on his third voyage, near the mouth of the river Esequibo. From there they took a southerly course but faced with the difficulties of sailing, they decided to return and sail in a northerly direction, passing by the mouth of the Orinoco River, reaching the Gulf of Paria, the Trinidad and Margarita Islands.

On August 24,1499 they discovered the Maracaibo, where the legend tells that when they went inside and saw several indigenous houses located on the water in the purest Venetian style, they decided to call that territory Small Venice or Venezuela.
From an economic point of view, the expedition was proving to be an absolute failure, as they could only collect a few pearls, a little gold and some hostile Indians to be sold as slaves. 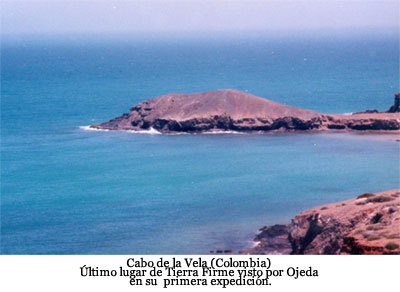 Once arrived at the peninsula that Ojeda called Coquibacoa and having in sight the cape of La Vela (present-day Colombia) decided to return to Spain arriving on September 5 at the port of Yáquimo, about 400 km west of Santo Domingo. Once in Hispaniola, he intercepted Roldán, who recommended that Ojeda approach Santo Domingo to speak with the admiral and tell him everything he had told him, but instead of doing so, they took a westward course and continued going ashore to collect brazilian bread and bread made by the Indians (hunting). These incursions provoked several confrontations between the Roldán and Ojeda’s troops. Finally, Captain Ojeda returned to Cadiz in the last weeks of November 1499, without being clear what route they took, if north to Cuba and then the Lucayas taking the current from the Gulf of Mexico, or east to San Juan and then north to Spain.

This would be the first trip of the so-called “viajes andalusian” in which a new impulse would be given to the discovery, colonization and conquest of the new continent, being able to discover and recognize in only 4 years almost all the Central and South American coast. These trips would be executed in different expeditions by the brothers Cristóbal and Luis Guerra, Rodrigo de Bastidas, Pedro Alonso Niño, Vicente Yáñez Pinzón, Diego de Lepe and others.