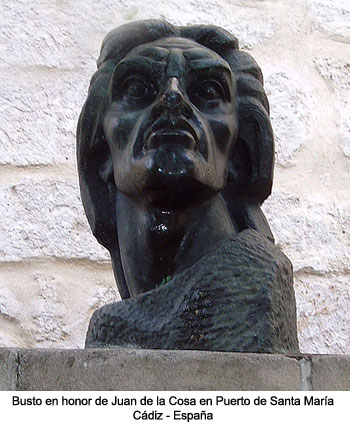 Burial: Unknown. He died when he was wounded by poisoned arrows fired by the natives of this Colombian area.

– Spy for the Spanish crown in Portugal.

– Appointed Mayor Marshal of Urabá but did not exercise it due to his death.

– He participated in almost all the first trips to the American continent. In the first voyage of discovery he collaborated by contributing the nao Santa Marí­a, which belonged to him and of which he was master, since Cristopher Columbus was the captain.

– He participated as a senior pilot and cartographer in the minor trips or Andalusian trips together with Alonso de Ojeda and Américo Vespucio. On these trips, Juan de la Cosa mapped for the first time the coasts of northeast and north of South America.

– With all the information of his travels and that of others, in 1500 he drew up the oldest preserved world map of the American continent (which you can see at the bottom of this entrance).

– Also in the year 1500 he joined the fleet of Rodrigo de Bastidas the main pilot of the expedition. On this trip arrived in the New World Vasco Núñez de Balboa. They sailed along the northern coast of South America until they reached the Gulf of Urabá in present-day Colombia and continued on to God’s Name in Panama.

– He sent a message with Columbus on his first voyage, accusing him of the shipwreck of the Santa Maria on the shores of the Spanish island. It would be curious if he himself sank his own ship. On other voyages of Columbus they did not return to share ship but expedition due to the undoubted quality that had as navigator.

– He was one of the signatories of the document prepared by Columbus on his second voyage in which they affirmed that Cuba was Tierra Firme, however, after a few years on his world map he made it very clear that it was an island.

– Although he was of Cantabrian origin, he lived almost all his life in Port of Santa Marí­a (Cádiz-Spain).

– He attended the Burgos Board of Sailors in 1508 as an advisor to the Catholic Kings. At that meeting, an expedition was prepared to find the famous sea pass towards Asia and also to decide how to administer the new discovered Tierra Firme, being divided into two governorates: Veragua (Central America) for Diego de Nicuesa and Nueva Andalucí­a  (presents Venezuela and Colombia) for Alonso de Ojeda.

Here is a biographical video about Juan de la Cosa: