April 17th,1492 the capitulations of Santa Fe are so called because they were signed in the Granada town of Santa Fe, Christian headquarters during the siege of the Catholic Kings against the last vestige of Muslim power in the Peninsula.

The capitulations were a contract signed between the monarchs and individuals for the execution of different operations or actions, but this contract was not bilateral in nature but rather a concession and a grant from one to the other, i. e. a real permit that provided the particular exclusivity in the mission entrusted.

Specifically, in this document we are dealing with, the agreements reached between the Catholic Kings and Christopher Columbus on the expedition to find a route leading to the Indias (those of Asia) through the Atlantic Ocean, that is, sailing to the west.

Columbus’ claims were great, which is why it was rejected on numerous occasions by various kings of the time. Likewise, with the Catholic Kings, who rejected him on two occasions. But the sailor’s insistence and the fact that the circumstances of the moment changed made it possible to reach an agreement. 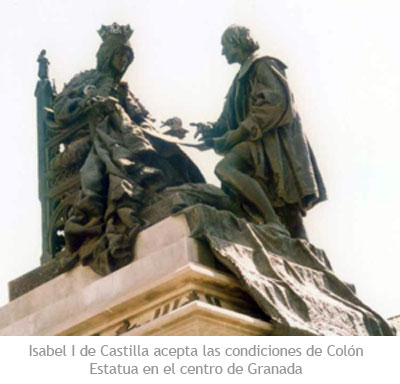 The text of the document has a strong mercantile content, religious and missionary issues do not appear in spite of the religious character with which the whole expedition and conquest was later dyed. This is because the expedition’s main intention was supposedly to find an alternative route to trade with Asia and not to discover or conquer new continents.

In the Santa Fe Capitulations, Christopher Columbus was given the following:

In spite of all these agreements and concessions Christopher Columbus died without being rich, he achieved many rights and privileges, but without raising a fortune as might be expected. For this reason, their children had to undertake an endless judicial struggle to materialize these inheritance rights derived from these capitulations and recover some that were later annulled, are known as Colombian disputes.

One fact to highlight is that in the heading of the capitulations, reference is made to the fact that everything agreed upon affects “what he has discovered in the Oceans Seas and of the voyage that is now“, that is, according to this document something had already been discovered, a compelling reason why perhaps the Catholic Kings accepted the exorbitant pretensions of the Genoese. From this one can deduce the certainty they had that something was going to be found when they knew about it, perhaps the only doubt was what exactly they were going to find and how much the benefit would be.