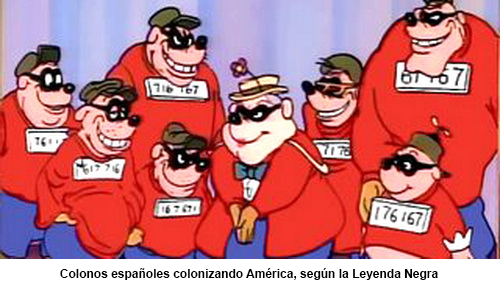 One of the most recurrent accusations of the legends is that the majority of Spaniards who came to the New World to populate it were criminals freed from the Castilian prisons and that in exchange for this freedom they were offered to leave to the new territories and thus killed two birds of a stone: colonize the new kingdoms and empty the very stunning peninsular prisons. Evidently this is another of the great lies of the black legend, a lie widely spread by the educational plans of most Latin American countries.

Looking at the first Castilian expeditions to the New World and its typology, we can see that this was changing as the conquest was developing. The Colón’s first voyage was an exploratory one, so the crew and people who travelled were mainly sailors, there was no intention to populate, it was simply to explore and establish the first contacts with the natives and obtain information about the presence or not of precious metals. On the second voyage of 1493 it was a crewed settlement expedition that would allow the organization of exploration expeditions. A total of 1500 people traveled there, distributed in 17 ships and divided as follows:

* Rest of crew members up to 1500: wives of professionals and their children, servants, etc: 185.

With these settlers the city of Isabela was founded in the north of the Hispaniola island in 1494, being the first urban enclave built by Spaniards in the New World. As we can see, there are no criminals or prisoners released, even if there could be some, their presence would be negligible. Everything was well organized so that the new settlement would be a success and begin to function as an authentic city. Bringing criminals into the population would have been nothing but trouble. Years later, with the creation of the Seville’s Casa de Contratación anyone who wanted to come to America had to register and be accepted, could not cross the ocean whoever wanted. He had to be an old Christian and meet the variable demands that royal officials demanded depending on the circumstances, such as that of not having a criminal record and observing good conduct.

Nor can we forget that the expeditions to America were not trips, let’s say, public, paid for by the crown’s treasury, but private companies in which the travelers had to pay the expenses and contribute their own weapons and goods. Depending on their contribution, this would be the prize received in case of conquest or occupation of land. Obviously there was a permit, a public license issued by the crown that allowed to organize and execute such a trip but did not contribute anything economically so I find it quite difficult for a thief or criminal to have that money or property to cover the adventure. Much less be accepted by the organizer of such an expedition.

After the first years of exploration of the Caribbean environment, some parts of it began to be populated by large expeditions promoted by the Castilian crown with the aim of founding settlements, such as Nicolás de Ovando in 1502 to Santo Domingo. In that expedition, some 2000 people arrived in 30 ships of the most varied occupations and professions. Later, in 1514, Pedrarias arrived in Santa María del Darién (Panama) with more than 1000 settlers in 22 ships.

Later on, as the conquest of America, ships arrived with colonists according to the needs of each place and, as I said before, always regulated by the Casa de Contratación so that no undesirable elements arrived in American lands. The pirates and privateers arrived with the French, English and Dutch pirates and corsairs, but of course they were not going to Seville to sign up or ask for permission.