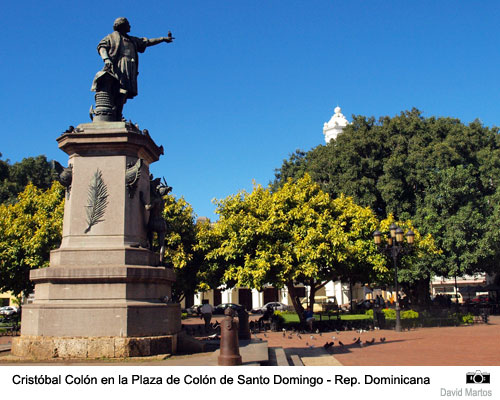 Christopher Columbus is believed to have been born in 1451 at undetermined place, although officially he was born in Savona (Genoa, Italy).

Colón died on May 20th,1506 in Valladolid (Spain) suffering from various ailments.

– Official discoverer of the New World.
– Admiral, Viceroy and Governor General of the Indies since 1492.

After several attempts with the Catholic Kings, the Portuguese king, the French king, and it is even said that he sent to offer it to the king of England, obtained the approval and financing of his plan, by means of the capitulations of Santa Fe, to reach the Indies crossing the Ocean Sea (Atlantic Ocean).

– October 12th 1492: he arrived at the coast of Guanahani, commanded by 3 Castilian ships in the so-called “Discovery of America“. Immediately he discovers Cuba and the Hispaniola island.

– In 1493 he discovered the Small Antilles and the islands of Puerto Rico and Jamaica.

– In 1498 he explores the coast of Venezuela. In the same year, he was arrested by Francisco de Bobadilla, the royal emissary, and sent to Spain in chains charged with various crimes.

Other interesting facts about Christopher Columbus:

– The Columbus’ birthplace is a mystery. Many cities and regions of the world attribute it to themselves: from Genoa, supposedly an official and admitted place until recently by birth, to Mallorca, Catalonia, Portugal, Andalucia, Guadalajara, Basque Country and Galicia. What it is possible to guess is its possible quality as a converted Jew, since it was typical at the time that those Jews who wanted to go unnoticed and so that the Inquisition could not obtain data, eliminated all their documentation to cover up his past.

– Almost all of his life before the discovery is a mystery too. In the biography written by his own son, Hernando Colón, many things are not clear, what’s more, he even adds doubts.

– Obsessed with finding the Indies where they were not, he died without knowing for sure that he had discovered a new continent, even though he would suspect something.