At the end of the 15th century in Spain, the three great monotheistic religions coexisted together: Christianity, Judaism and Islamism. The conditions imposed on Muslims after losing the war of Granada allowed them to maintain their cults and customs in a climate of supposed religious tolerance. However, not only was worship within the Christian kingdoms forbidden to the practitioners of Judaism on March 31,1492, but they were also expelled, unless they renounced their faith and converted to Christianity. Signaling a four-month period until July 31st to leave the kingdom. 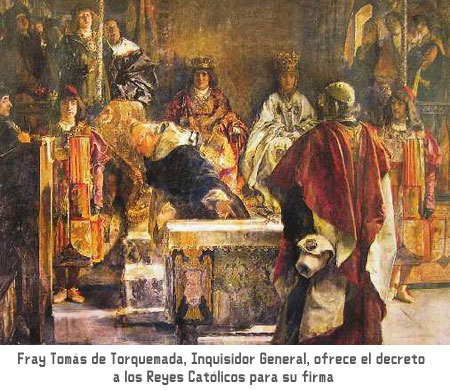 The point is that already in the Toledo Courts of 1480 the Jews were separated from the Christians and forced to live in separate neighborhoods or aljamas and they also had to carry some red circles that identified them as such. However, they were able to keep their own laws and celebrate their religious ceremonies without any problems.

In 1484, a small expulsion of Jews residing in Seville, Cadiz and Cordoba was also carried out in 1484, allowing them to stay inside Castile, settling mainly in Extremadura. The Inquisition also asked that they be expelled from Aragon but King Fernando became a little crazy and in the end the matter was forgotten.

And why did the expulsion take place in 1492 and not before? It can be said that the Catholic Monarchs waited to have other very important issues resolved, such as the Castilian civil war and the subsequent reconquest of Granada. In addition, the Jews financially and administratively helped Castile in its war against the Muslim, so expelling them at that time would have been counterproductive.

For a long time there has been a bitter historiological debate on the real causes of the expulsion of Jews from Spain, but a brief summary of the following:
– In the population and several centuries later, there was still a certain resentment towards them for their support for the Muslim invasion and conquest of the peninsula.
– The pressure exerted by the Inquisition, who saw in them a danger for the complete Christianization of Spain, as well as that they considered their rituals and heretical customs.
– The nobility saw the incipient bourgeoisie of Jewish origin as a rival in its business, so it was able to influence the kings.
– The usura, which despite being limited by law and forbidden by the Catholic Church, was practiced by Jewish financiers.
– To be the cause, for Christians, of the passion and death of Christ.
– It has been said that the Catholic Monarchs with this maneuver wanted to keep the goods to expropriate the Jews expropriated, but it was precisely the wealthiest Jews who converted before and thus preserved their patrimony. This assumption does not make sense because the Jews paid taxes and the crown was left without this income. 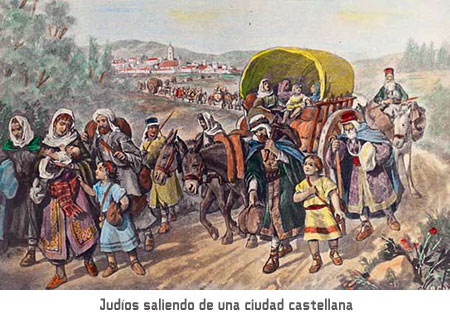 Reading the Decree of the Alhambra or Edict of Granada in its first paragraph we can see the true cause of this expulsion: “we are informed by the Inquisition and others of the great damage that persists to Christians by interacting with the Jews, and in turn these Jews try anyway to subvert the Catholic Holy Faith and are trying to hinder Christian believers from approaching their beliefs“.

That is to say, the motive was purely religious, Jews are expelled because according to the Inquisition, which was responsible for monitoring that conversions were sincere, they tried to convince and reverse the faith of the so-called new Christians or converts to the Jewish faith….

This decree ordered that Jews could not remove gold, silver, weapons or horses from the kingdoms. They had to sell their goods in a very short time and could only carry bills of exchange offered by foreign financiers, yet thanks to their financial skills they managed to make great fortunes.

Many of them became converted to Christianity, especially the best placed socially and politically, and thus did not have to leave and kept their riches and also their old faith, but this time in a clandestine way. However, this method was not entirely effective since the Inquisition monitored and persecuted all those suspected of the judaizing, i. e. of continuing to practice Jewish rites.

Disobedience to this decree entails the condemnation of death and confiscation of property.

It is estimated that between 50,000 and 200,000 people left. They mainly went to Flanders, North Africa, Italy and the Ottoman area of the Mediterranean. In many of these countries, the sefardi­es preserved their customs and language, very similar to Spanish, which even today they still practise in some corners of old Europe.

In the economic order the expulsion meant a serious loss since the Spaniards were not able to exercise economic administration as skillfully as the Jews, but also had to resort to Genoese and Germans to do so at the cost derived from it.

In the other orders, the expulsion of the Jews did not represent a too great setback because Castile was in full ascension as a political, military and economic power and was able to fill the void left by this royal order.

The next step of the Catholic Monarchs in the religious unification of Spain was the expulsion of the Muslims in 1502.