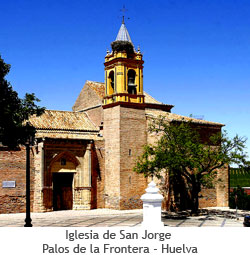 On May 12th, 1492 Christopher Columbus departed from Granada in the direction of Palos, a place chosen for the departure since the Cadiz port was practically collapsed by the departure of Jews decreed by the Catholic Kings few days before. The other reason it was chosen is because it was sentenced to provide the Castilian crown with two free caravels for two months. The crime was to contravene the Treaty of Alcaçovas, according to which the Castilian fishing vessels could not fish south of the cabo Bojador, area from which the monopoly was Portuguese. Palos was sentenced on April 30th to make them available to Christopher Columbus within ten days with all his weapons and equipment.

This sentence was read on May 23th, 1492 at the door of the Iglesia de San Jorge de Palos in front of mayors, regents and several inhabitants of the area. The royal order was practically ignored by the palms but later when they learned of the nature of the expedition, which was captained by a foreigner completely unknown to them, they emphatically refused to comply with the orders and, above all, to enlist in it, causing numerous riots and disturbances in the area. 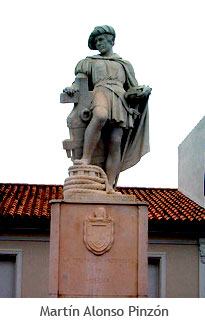 It was not until the rich Huelva sailor Martí­n Alonso Pinzón, informed by the friars of La Rábida, that the work got off to a good start. Not only he did contribute money and better ships than Columbus had seized, but also, thanks to his fame in the area and his support for the expedition, got the confidence of the locals and the enlistment could be carried out without major problems. Without Martí­n Alonso Pinzón, this trip would not have been possible or would have taken a long time.

The crew was composed of about one hundred persons approximately. Most of them were sailors from Palos, Moguer and Huelva, 70 andaluces in total, some vascos and gallegos and a small group of foreigners: a Portuguese, a Genoese, a Calabrian, a Venetian and a Guinean by the name of Juan, the first black person to arrive at New World.

Much has been said about the composition of the Castilian crews of conquest, asserting for free that within them there was a large number of criminals that they would redeem their convictions by pointing to these very dangerous expeditions, feeding the black legend of Spanish brutality and savagery. But the truth is that in this case, on the first trip, there were only four convicts: one sentenced to death for murder in a tavern fight and three guilty of organizing the escape of a mutual friend from prison. These were the only crew members forced to enlist, the others were volunteers.

There were joined officers, pilots, sailors, sailors, cauliflowers, cabin boys, carpenters, an interpreter, a surgeon, a pharmacist, a cooper, a tailor, a tailor, a silversmith, a major sheriff, a royal scribe and a seeker. Their salaries were considerable for the time: 2,000 maravedíes per month for the masters and pilots, 1,000 for the sailors and 666 for each cabin boy, in addition they received four advance payments for which they were able to leave money in Spain before leaving the trip.

Finally, at the beginning of August, they were ready to leave two caravels and one nao, the last one, la Santa Marí­a, contributed by the Cantabrian sailor Juan de la Cosa and that would be the captain ship commanded by Columbus himself. The two caravels were la Niña, owned by Juan Niño and captained by Martí­n Alonso Pinzón, and la Pinta, owned by Palermo Cristóbal Quintero and commanded by Vicente Yáñez Pinzón, brother of Martí­n Alonso.

In other words, it wasn’t three caravels, it was two carabels and one nao.