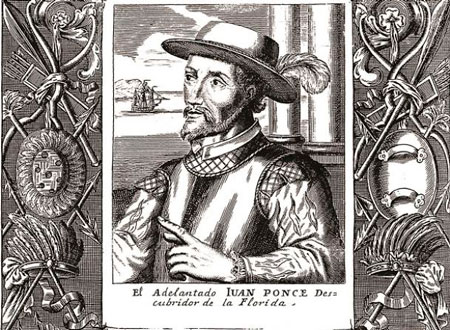 Juan Ponce de León, born in Santervás de Campos (Valladolid – Spain) in 1460, arrived with Frey Nicolás de Ovando in 1502 at the Hispaniola island. He took part in its conquest and pacification and for this was granted the governorship of Higüey in the eastern part of it where he founded his capital city called villa de Salvaleón de Higüey in 1504. There he traded gold and yuca for riches.

With these gains he was able to organize an expedition in 1509 to neighboring San Juan Bautista Island founding Caparra, today San Juan, the first Spanish settlement in today’s Puerto Rico. The Catholic King appointed him governor of San Juan but did not last long in office. Diego Colón, son of Christopher Columbus and Second Viceroy and Admiral of the Indies, protested and claimed for his viceroyalty the possession of the island of San Juan for having been discovered by his father. The courts proved him right and Ponce de Leon was deposed. But he did not surrender and requested permission to explore north of the Cuba and get a governorship, which was his big goal. 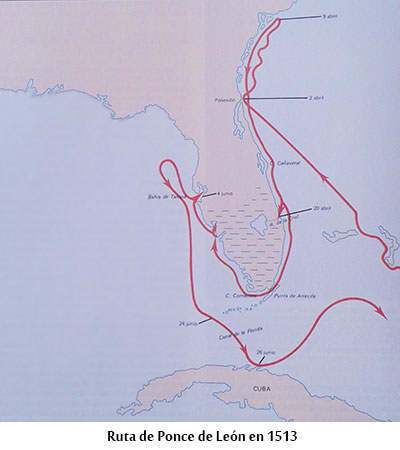 He prepared three ships that he financed with his patrimony and departed on March 4th, 1513 from the port of San Germán, on the island of San Juan. They went to look for an island and a month later they found hundreds of them because the first lands they saw were the Bahamas Islands through whose intricate labyrinth they rushed. After several weeks of searching for exploration and a constant disembarking and embarkating, they arrived at where appeared to be an island larger than the others and which was nothing more than the peninsula they called Florida, name that referred to the great variety and colorfulness of its flowers or perhaps because the day of its discovery was the day of the Florida Pascua. This is not very clear.

On April 2th, 1513 was the first time a European set foot in North America, this occurred in the area near the present Cape Canaveral. They continued to explore the new coasts under the attentive and violent gaze of the natives. Geographical data and information on flora and fauna were collected. They discovered the Gulf Stream that would later allow an easier and quicker return to Spain from the New World.

They returned to Castilla with the news of these new discoveries and requested permission to discover, populate and explore the new lands by being named after Fernando Adelantado from the islands of Florida and Bimini. Directly from there they organized an expedition in 1515 that when arriving in San Juan would disintegrate due to disagreements between Ponce and his captains.

It wasn’t until 1521 and probably very influenced by the good news coming from Mexico of the victories of Cortes that Ponce decided to embark again on a conquering adventure. He organized a colonizing expedition of about 200 people and 50 horses with peasants, farmers, cattle ranchers who carried their tools, seeds and cattle to populate the new lands. Exploring the coast they searched for a place to settle, but the illnesses and constant harassment of the Calusa Indians made them abandon their objective and returned to Cuba where Ponce de León died from the wounds produced by a poisoned arrow.