Before arriving Christopher Columbus in Spain he was already thoroughly preparing how to expose his supposed successes in his journey of discovery of the new routes to Indias. To this end, he began by writing letters to his main sponsors: the Catholic Kings, to the notary public, the scribe Luis de Santángel (letter) and to the treasurer, Gabriel Sánchez, these last two important positions of the Aragonese kingdom that had great weight in convincing the kings to collaborate with the admiral’s expedition.

In these letters he tried to demonstrate that his previous calculations in his plan of discovery were becoming a reality and that the matter was at its best, highlighting and giving great importance to facts that in themselves were unexpected and seeing signs of Asia where they did not exist. It was also of great importance that these letters were distributed throughout Europe and printed in the most important printing works. 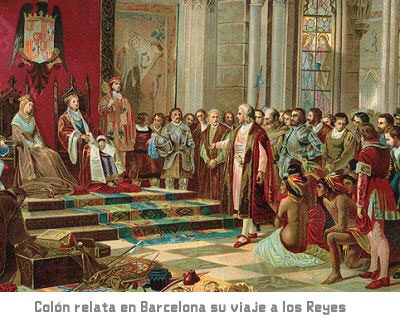 The success of his letters was such that the Catholic Kings, on March 30th, urged him to visit them in Barcelona, where they were attending to some matters, in that letter they gave him a treatment of “our admiral of the Ocean Sea and Visorrey, and governor of the islands that have been discovered in the Indias”. The reception of the Catholic Kings probably took place in Barcelona Royal Palace where Christopher Columbus, seated at the same height as them (everything else) told his story, half reality, half his own fable, showed the seven Indians carried to the peninsula and handed over the gifts of gold, pearls, strange indigenous labor and the parrots that he had so jealously kept to be shown.

Immediately the Catholic Monarchs set in motion the machinery to legitimize the discoveries of the new lands: on May 4th, 1493 Pope Alejandro VI signed the bulls “Inter Caetera II and III” in which he granted to Castile the right to continue discovering new territories in the Indias and gave them the ones discovered by Columbus. Shortly afterwards, new bulls emerged in which geographical boundaries were established between Spain and Portugal and the first apostolic legacy in the New World was named, Fray Bernardo Boyl.

After all this Columbus was immediately charged with preparing a second trip with a larger fleet, more people and clear intentions of founding a first colony in the Indies.