Cristopher Columbus had to seek funding for his project, but he was not only seeking financial resources, also the support of some political power that would give him legitimacy, exclusivity and power to execute his plans. Hence, he turned to the most important European kings of the time to ask for their approval and agreement.

Columbus offers himself to King John II of Portugal

His first attempt was in 1484 with the rey Juan II of Portugal, to which he presented the project and was examined by the Junta dos Matemáticos for analysis. These experts did not believe in the Narrow Sea theory, according to which the distance separating Europe from Asia was not as great as it was supposed to be, and so they rejected it, in addition to the fact that for the Portuguese king the political and economic claims of Columbus were excessive, John II believed something in him anyway, so it is said that in secret and without Columbus knowing it, he sent a caravel to follow the direction proposed by the sailor, but they did not find much and in the face of the fear of remoteness they returned to the Cabo Verde islands, from which they departed. 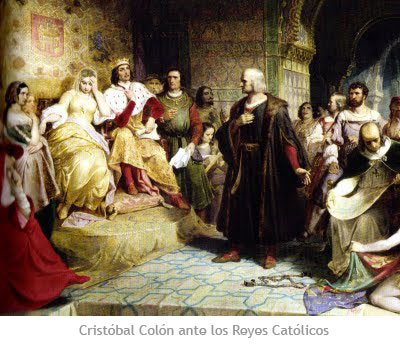 Christopher Columbus arrives in Castile in 1485

In the face of this first failure, he decides to move to Castilla, the other European kingdom with more weight in the region. He left in charge of the monks of convent of the Rábida to his son Diego and went to Alcalá de Henares, where the Catholic Monarchs who had already been informed of the project by Bro Hernando de Talavera, confessor of the queen Isabel, were waiting for him.

The kings convened a meeting of experts from the universities of Cordoba and Salamanca who studied and also rejected the project as fantasy and excessively demanding in economic terms. The kings complied with the experts’ verdict but kept an ace in their sleeve, giving hope to Columbus that in the future they would consider this project, since at that time they were in full War of Granada and there was no doubt that the war of Granada had not been a success.

Colón frustrated Columbus returns to Portugal to negotiate again with Juan II but precisely at that time the Portuguese sailor Bartolomé Dí­as managed to turn the cape of Good Hope, so the route to Asia was clear, the main objective of the Portuguese navy, causing the Columbian project lost interest. 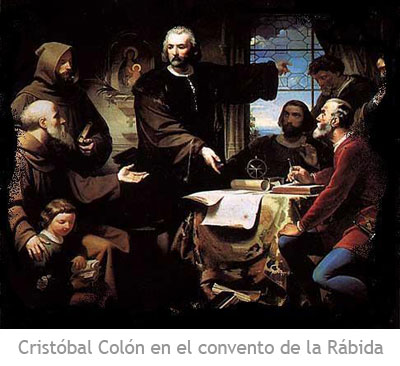 In 1491 Columbus returned to Rabida to pick up his son Diego and go to France to offer his project to the French, but fray Juan Pérez kept him with the excuse that he had sent a letter with favorable opinion from the doctor of Palos, Garcí­a Hernández, an astronomy expert, to Queen Isabel, and to wait for her answer in case it was positive.

Friar Juan Pérez gets another interview with Queen Isabel

The queen replied to Juan Pérez asking him to visit her in court. During this visit, the friar defended the project in an eloquent and detailed manner and managed to get the queen to ask Columbus to resubmit the project. He did so and asked for conditions that were not accepted by the kings, so he was again rejected, but when Columbus had already left Granada a sheriff sent by the kings asked him to come back, that they wanted to talk to him again. It is believed that this change of opinion of the kings was thanks to Luis de Santángel, who interceded directly with the queen and contributed the capital that was supposed to cover the crown and convinced the kings that there was little to lose and much to gain.

On April 17th, 1492, the capitulations of Santa Fe were signed, granting Columbus the title of admiral of the expedition, viceroy of the land he conquered and ten percent of the wealth he could bring to Castile. These capitulations were written by Juan de Coloma on behalf of the kings and by Brother Juan Pérez on behalf of Christopher Columbus.