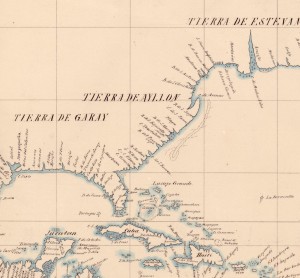 Lucas Vázquez de Ayllón, born in Toledo (Spain) in 1475, was a oidor of the Royal Court of Santo Domingo (founded in 1511) and a sugar courier on the Hispaniola island. He traded with slaves and pearls that he obtained by financing expeditions to the coasts of the pearls in the north of present-day Venezuela and the Lucayas Islands (Bahamas Islands). One of his most well-known facts was the attempt to negotiate between Hernán Cortés and Pánfilo de Narváez, sent by the governor of Cuba Diego de Velázquez, in Veracruz to reach an agreement and avoid the confrontation between Castilian troops but it was unsuccessful and the struggle took place by defeating Cortés and taking Narváez prisoner. Most of his troops joined the Extremaduran army. Vázquez de Ayllón, once proven the advances of Cortés in the Aztec empire and the possibilities that it represented for the Spanish crown faced Narváez and gave the reason before Diego Velázquez to Cortés.

As he said, Vázquez de Ayllón captured Indians against the Spanish colonization to enslave them because this was stipulated by law, if they were peaceful and accepted Castilian sovereignty, they were untouchable. The native demographic decline on the island of Hispaniola and Cuba forced these catches to provide labor in the mines and domestic services of Hispanic American cities. In one of these expeditions, the ships traveled further north to the Florida and after a storm hit the land where they encountered peaceful Indians with whom they traded and exchanged information. The Castilians marveled at the friendliness and hospitality native.

The success of this last expedition was known, but this time they organized more to capture slaves directly to the same area. Once there, through a cruel deception, they captured the natives and took them to the island of Hispaniola. This contravened Spanish laws that explicitly prohibited the use as slaves of natives who showed themselves to be peaceful and respectful of the Spaniards, so Ayllon was called to chapter to explain why in his expedition they had captured peaceful prisoners. Thanks to his influence in the Royal Audience and promises of future expeditions and more wealth, he managed not only to get out of the difficult business but also to achieve the title of advance and a license to conquer and colonize much of the coast that they called the name Tierra de Chicora.

In 1522 and after listening to the magnificent stories of the expeditionaries to the Tierra de Chicora and the slave Francisco de Chicora Ayllon decided to conquer the area but before getting involved in such a great task organized a couple of expeditions of recognition and confirmation of its richness and possibilities, as well as one of its major attractions: the possibility of finding the northern pass between the Atlantic and Pacific oceans. For this in 1523 he put the navigator Francisco Gordillo who arrived at Cape Fear in North Carolina and in 1525 to Pedro de Quexos also led two ships that reached the coasts of the current state of Delaware and both confirmed the goodness of the natives and the possibilities of those lands. It was finally granted a license to search for a passage to the Islands of Spices in the latitude of the current Virginia and North Carolina, that is, between 35 and 37 degrees.

He prepared an expedition of 600 people that departed from the port of Santo Domingo in 1526 heading north. In their first stopover near Cape Fear they could not do anything because it was all muddy and swampy terrain. They continued further north to the present Chesapeake bay in Virginia to which they gave the name of Santa María as indicated by the map of Diego Ribero in 1529. In those lands they founded San Miguel de Guadalape in October 1526, being the first European settlement in the present territory of the United States, more than a century before the arrival of the Pilgrim Fathers of Mayflower.

But this first urban nucleus had a very short duration. Winter came quickly, the previous autumn rains that muddy everything and the drop in temperature caused them not to be able to harvest or collect food after several months of hunger and disease, which coupled with the non-collaboration and harassment of the natives meant that as soon as they could, the survivors repackaged and returned to Santo Domingo. Only 150 of the 600 who had left a year before returned, including among the deceased the Adelantado and organizer of the expedition Lucas Vázquez de Ayllón who died of fever. He was the first European founder in those lands and also the first to explore and tour the east coast of North America.