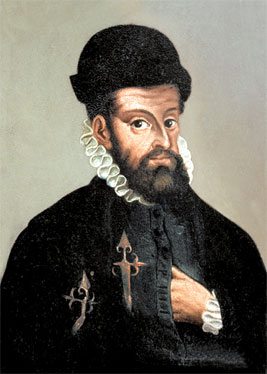 Francisco Pizarro was born on March 16th,1478 in the city of Trujillo (Cáceres-Spain).

Francisco Pizarro died on June 26th,1541 in his house in Lima (Peru) killed by supporters of Almagro el Joven. His remains are currently in the cathedral of Lima (Peru).

– Explorator and conquistador of Central America with Alonso de Ojeda in 1510.

– Governor, captain general, advanced and chief sheriff of the governorate of Nueva Castilla in 1529.

– Before traveling to the New World he participated in the wars of Italy.

– In 1502, he passed to the Indies in the fleet of the governor Frey Nicolás de Ovando.

– He explored Central America together with Alonso de Ojeda and participated in the expedition of Vasco Núñez de Balboa who discovered the South Sea (Pacific Ocean).

– By the capitulations of Toledo in 1529, he was appointed governor, captain general and forward of Peru.

– He confronted Diego de Almagro for the possession of Cuzco in the Battle of Las Salinas. It was the prelude to Peru’s civil wars between the slate-makers and the Almagrists.

I add a video biography of Francisco Pizarro: