A legal institution that played a major role in the political management and real control over the officials who performed their functions in the New World was the Residencia Trial. This was a judicial procedure by which officials of a certain rank (Virreyes, Presidents of Real Audiencia, mayors and bailiffs) were judged for their performance in their government functions, thus trying to minimize and avoid possible abuses and corruption in the use of their power. This process was carried out at the end of his term of office and was normally carried out by the person who was to replace him. 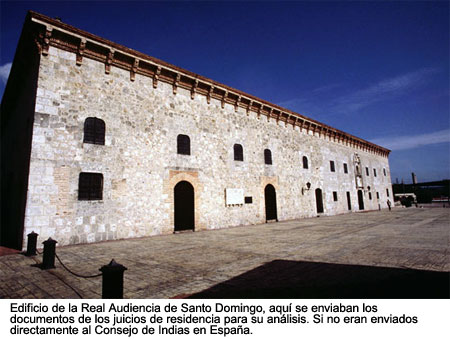 The report analysed in detail with documentary evidence and interviews with witnesses the degree of compliance with the royal orders and their work at the head of the government. The collection of evidence was carried out by a judge chosen by the king at the same place where all the documents were collected and the interviews conducted.

The residencia was a public event that was proclaimed to every people so that the whole community could participate and be aware of it. It was composed of two phases: a secret and a public one. In the secret phase, the judge confidentially interrogated a group of witnesses to testify about the conduct of the officials on trial, also examined government documents and visited the prison. With all this information, the magistrate drew up the possible charges against the residenciados. In the second phase, the public, interested neighbors were free to file all kinds of complaints and lawsuits against the officials and they should have defended themselves against all the charges that would have been filed at both stages of the process.

Later, the judge drafted the sentence, pronounced the sentences and costs and all the documentation of the proceedings was sent to the Consejo de Indias, or to the corresponding Audiencia for approval. The penalties that were most frequently imposed were financial fines and temporary and perpetual disqualification from holding public office.

This could also happen even when it comes to promotion to office, since if it was found that his or her government work had not been positive, he or she would lose the option of such promotion.

The judgment of residencia was not exclusive to the New World but applied to all territories of the Spanish crown. Since almost all the documentation was sent to the Consejo de Indias, the kings could learn first-hand how things were being done in their distant territories and take appropriate measures to prevent abuses and reaffirm their power.

But (there must always be a but), in many cases the judgments of residencia were no more than mere spectacles in which the local rulers were extolled by their neighbours, since they benefited them more than the crown, and from the point of view of which this institution was created, that was not their objective. Local elites dominated the local political and legal spheres, which was precisely where the trials took place, and were able to manipulate documents and bribe witnesses, giving a distorted image in Spain of what actually happened.

But even so, they were a powerful tool and greatly reduced the corruption and abuse that would probably have been committed without it.

Famous were the residencia trials against Christopher Columbus, Hernán Cortés, Pedro de Alvarado and many others. Any charges were subject to them.

The residencia trials functioned until they were repealed by the Cadiz Courts of 1812. It is very curious that it was the liberals who eliminated such a powerful tool for the control of corruption and political abuse by rulers. Probably bothered them for some irrelevant reason.