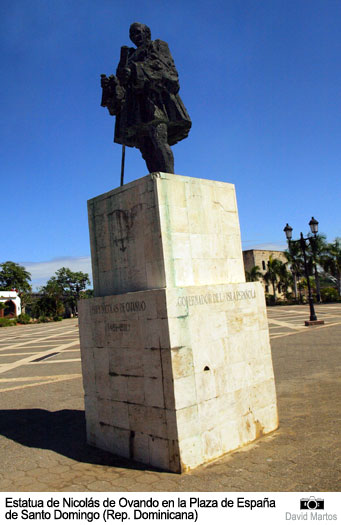 – Prince John’s preceptor until his death in 1497.

– Major Commander of the Orden of Alcantara in 1494.

– He founded the city of Santo Domingo in 1502 after being destroyed by a hurricane.

– Reorganized the Spanish administration for a more efficient management of taxes.

– Pacified the Hispaniola Island defeated the rebel chieftains. For these military actions he has been accused of excessive severity, especially for the execution of Anacaona and several taínos caciques.

– He developed agriculture with the introduction of sugar cane and livestock farming with the importation from Spain of pigs, cattle, horses and mules.

– He promoted and organized the expeditions of Ponce de León to Puerto Rico and Sebastian de Ocampo to Cuba.

– It boosted the arrival of African slaves to be used as labour, since the use of Indians as slaves was expressly forbidden by the crown.

– As a summary of his performance on the Hispaniola island, it is easy to say that in 1502 he arrived at a place in complete social, political and military chaos and when he returned to Spain in 1509 he left it peaceful, with a new and efficient administration based on the Castilian model and a prosperous economy.